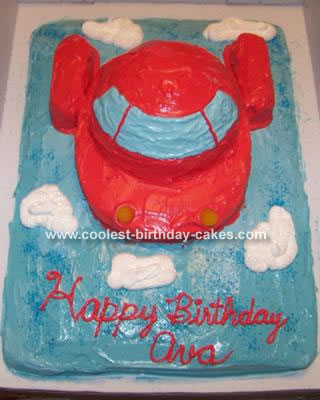 My DD, Ava Marie wanted to have a Little Einstein’s party for her 3rd Birthday. Since they are yet to make a “Rocket” cake pan, I got some ideas from the internet and made my own Little Einstein rocket cake. At first I was just going to make Rocket by itself but I decided to put it on a sheet cake.

For the sheet cake, I made 2 9×13 cakes, one chocolate and one yellow. I put them together and used store bought whipped icing and dyed it blue. I kept about 1/2 cup for later use.

For Rocket itself, I used a 9″ round pan and 1/2 of the ball from the Wilton ball cake pan. I baked both of these with 1 box of white cake. For the bottom of Rocket, I cut the cake into an oval by trimming a little off the sides. I placed the oval shape on the cake and iced it with red icing (this was hard to make but I used the whipped icing and food dye paste, tasteless kind). When it came to icing the bottom edges, I put some red icing in a pasty bag and piped it around the bottom so not to get red on the blue “sky”.

Next, I set the dome shape on top of the oval (slightly more towards the back) and iced it with the same red icing. I started by icing the whole back half of the dome then I iced the front top and bottom, leaving an opening to ice blue for the window in Rocket. Finally, I finished with window with the remaining blue icing. I used another pastry bag so that I was careful not to mix colors. When all was done, I piped two red lines to divide the window.

Lastly, I used two twinkies for the boosters in the back and iced them red.

For Rocket’s headlights, I used two yellow Dots candy because that is Ava’s favorite candy.

Finally, I used the rest of the red icing to write “Happy Birthday Ava” and I also used a big pastry tip to pipe white clouds around the cake.

This cake was a hit and it was actually the only “decoration” that we had due to my lack of finding LE stuff in party stores.

NOTE: Additionally, I was going to take two small sections of graham crackers and use red chocolate to cover them and stick them in the twinkies, but I didn’t want to risk messing up a good thing.