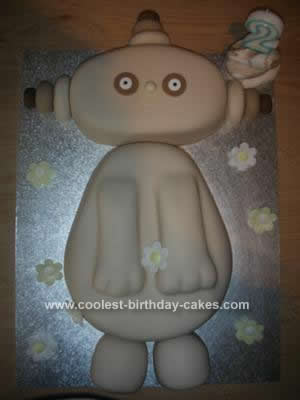 I made this Makka Pakka Birthday Cake for my son’s 2nd birthday. He absolutely loved it.

I made four 9″ round cakes (white velvet). One was used to carve the head (I did all of the carving by eye, no template used), two cakes were carved into the body (I also placed a wedge of cake on top of the bottom of the body to plump it up a bit) and the last cake I used for the legs and arms, the fingers were made out of sugar paste.

Once the carving was finished I coated each part in both glaze and butter cream then laid the first layer of sugar paste – when this was dry I laid the second layer, I achieved the colour by adding some dark brown food paste colour to the white sugar paste. Again, each part was iced individually and then pieced together after.

The decorations on either side of Makka’s head and on top were made by flattening balls of sugar paste. The one on the top of the head was secured by a strand of spaghetti as there was no board there for it to rest on, the colours of these flattened balls were made by adding more dark brown paste. The eyes were made from circle cut outs and the mouth was indented with a ball tool.

The character Makka Pakka likes collecting stones/pebbles therefore I decided to have a pile of 3 stones next to him with the number 2 candle on top. I then placed a handful of wafer flowers on and around the cake.