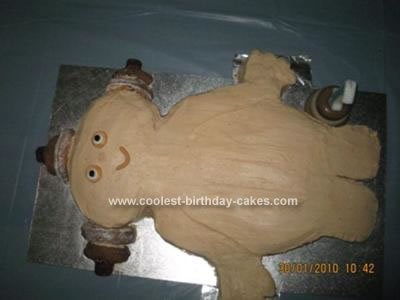 I made this delicious Makka Pakka Cake for my darling son’s first birthday, everyone said I should post it so others could see how creative I was and the end result was just brilliant.

I hired a oval tin for his head and a rectangle tin for the body, hands and legs. I decided on a delicious white mud cake recipe as it holds shape more and you can store in an air tight container and keep in fridge up to a week before icing as mud cakes get better with time. I baked it four days before and was so moist and yummy!

I then drew up a rough outline of Makka Pakka on baking paper placed on top of the cakes and cut with a sharp wet knife. It did crumble a little but as I was going to use butter cream icing it was no big deal as you can easily cover any flaws.

I mixed up the butter cream base with icing sugar and appropriate Ivory colouring that I purchased from a cake making shop until I reached the desired shade (please note that the colour does get a little darker overnight so best to stop at one or two shades lighter as it will adjust).

It was heaps easier to handle then roll out icing and you can patch up part such as the hands on my cake which I had to do separately then stick on to the rest of the cake using more icing!

I iced the day before the party and finished off all the details such as his head parts which I used cut up bits of cinnamon doughnuts which I covered in icing sugar, then left a cinnamon then covered the third with coco powder to have the three different shades. For the eyes, nose, mouth etc I used roll out icing which I added appropriate colouring to then just shaped them by hand then stuck them on.

I hope I have been inspirational to some people who want to make there kids a Makka Pakka. You can do it!