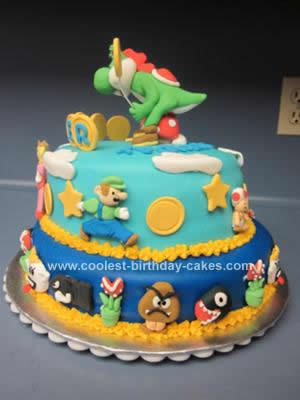 My grandson is a HUGE Mario fan, so it was no surprise to me when he asked for a Homemade Mario Brothers Birthday Cake for his sixth birthday. Yoshi is his favorite character, so he wanted Yoshi to be the center of attention.

I made Yoshi using a rice krispie formed around a shish kabob skewer. The first Yoshi I made running, he was too off balance and wouldn’t stand up, so he met my trash can. As I restarted, I decided to give Yoshi the mushroom to sit on (like he’s resting) to give him more stablity, and it worked nicely.

I made the little characters out of gum paste…starting SEVERAL days ahead of time. VERY time consuming! I did a repeating pattern of the evil characters for the bottom layer. Around the top layer, I made Mario, Luigi, Toad, Princes Peach, and a little Yoshi (the good characters). The clouds were left to dry on the inverted cake pans so they would be the correct shape for the top edge of the cake. The coins were put on wires and then I added his name to them using alphabet stencil cut outs.

I covered the bottom layer with the dark blue fondant and used lighter blue for the top layer. I used buttercream icing to “glue” the premade gum paste figures to the fondant. Since big Yoshi was on a skewer, I just stuck the skewer down through the cake and VOILA…it was done!

What a lot of work…but well worth it when I saw my grandson’s eyes as he gazed at it! 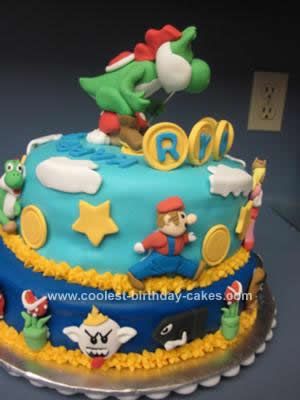 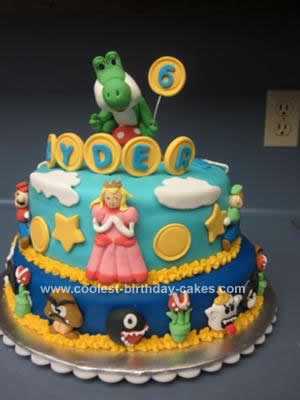 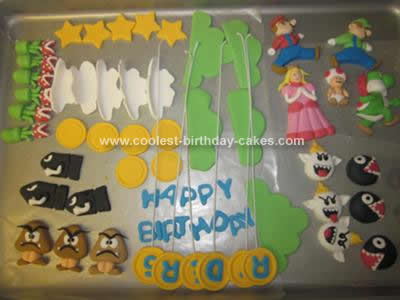