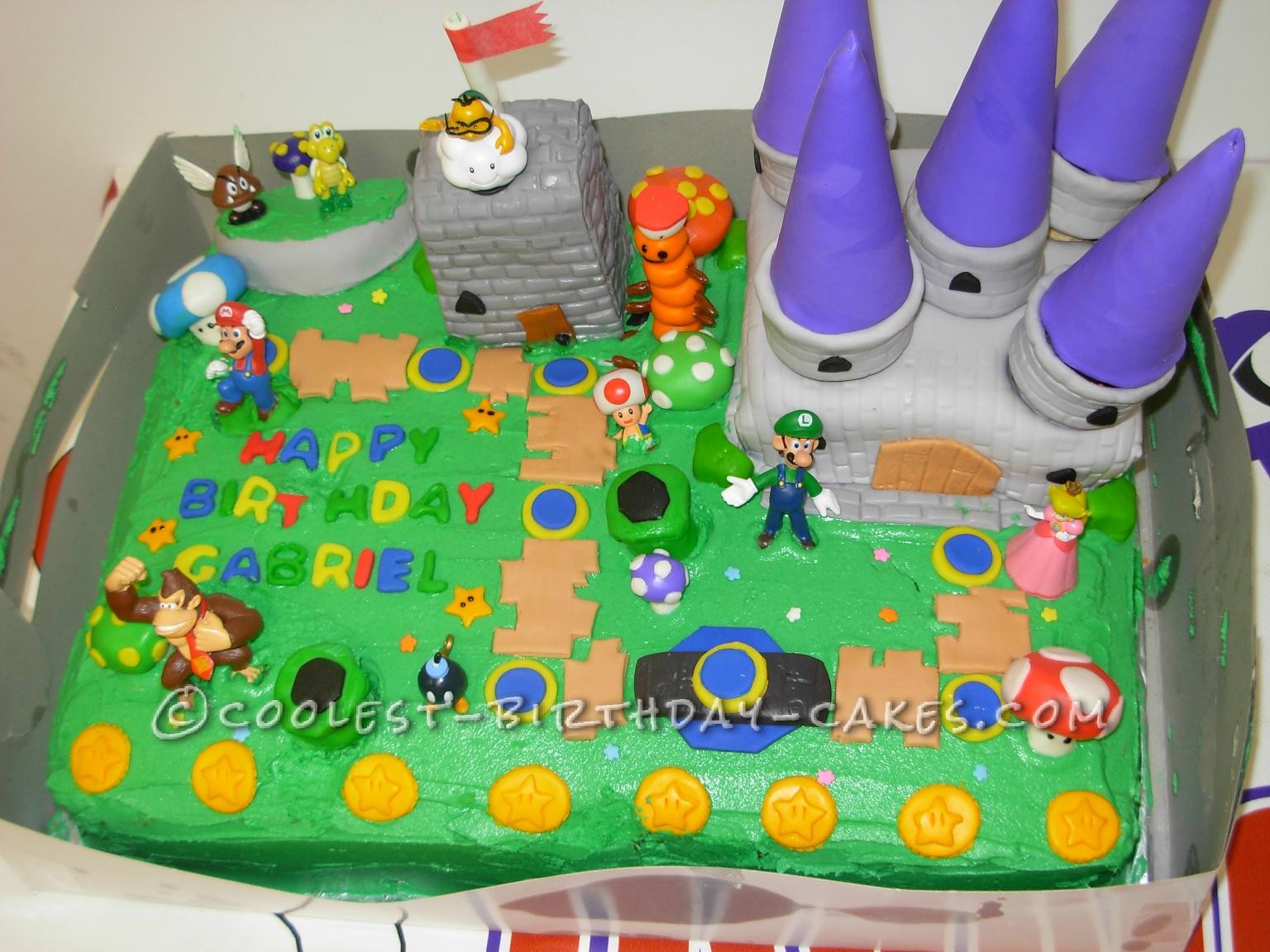 My son had recently started enjoying the world of video games via his Nintendo DS and saw a picture of a Mario Bros. cake (his favorite character) on the computer.  He immediately asked me (his dad) if I could make him a Mario cake for his 6th birthday party, since “daddy can make anything”.  I had never tried making a cake like this, so for two months I researched how to make fondant, gum paste, butter cream frosting, etc.  I then looked online for different Mario Bros themed cakes for inspiration.  I drew up a few designs on paper, trying to create a scene from the video game that would tell the Mario Bros. story.

I asked my son for input on the cake and he said he liked the World 1 overview, so I used that as a template and kind of expanded on it in order to bring in more characters.  Originally, I wanted the cake to be 100% edible, but after making one character out of fondant, it would have been too time consuming to make the other 9 characters.  I bought 2” plastic Mario Bros. figures  and was that a great idea for this cake.  It saved me so much time and it helped the cake look great also.  I practiced making a mushroom out of fondant and my son loved eating it so much, he asked that I “put a whole bunch” on the cake.

I wanted the cake to be as fresh as possible, so I made the fondant, the butter cream frosting and baked the cake the day before the party.  The next morning I started making the cake and it had to be done by 4pm to take to the birthday party.  I learned my lesson not to try that again, it took me nearly 9 hours to put the cake together!  While putting the cake together, my design on paper was going to need some editing due to the cake not being long enough.  So the final vision is a little more crowded than what I originally planned.

When I finally finished the cake with 23 minutes to shower, change and take the cake to the birthday party, I realized that transporting the cake was going to be tricky.  I thought ahead and put the cake together inside the white cake box, but the lid could not close due to the height of the castles.  So I cut a hole in the box lid where the castles poked out and I put that cake box in a bigger cardboard box, with some padding.   I then drove the cake very carefully to the party.

When it came time for the birthday cake, my wife had mentioned to everyone that I had  just made the cake that morning.   When everyone finally saw the cake, they were amazed!  The children all wanted a mushroom or a gold coin on their slice of cake.  When I told someone that this was the very first cake that I have ever made, he was completely shocked!  The cake was a big hit and my son was very happy with the cake!

Although, the cake took about 9 hours to put together, it took probably over 20 hours of experimenting with tools and recipes.  Not to mention, the endless searches for recipes,  Mario cake pictures and sketches of the cake I made.  I learned a lot from this cake, especially time management.  Now that my son and daughter know that daddy can make “awesome” cakes, a store bought cake will never do.  I have now been volunteered to be the Official Birthday Cake Maker with no request too crazy for dad to handle. 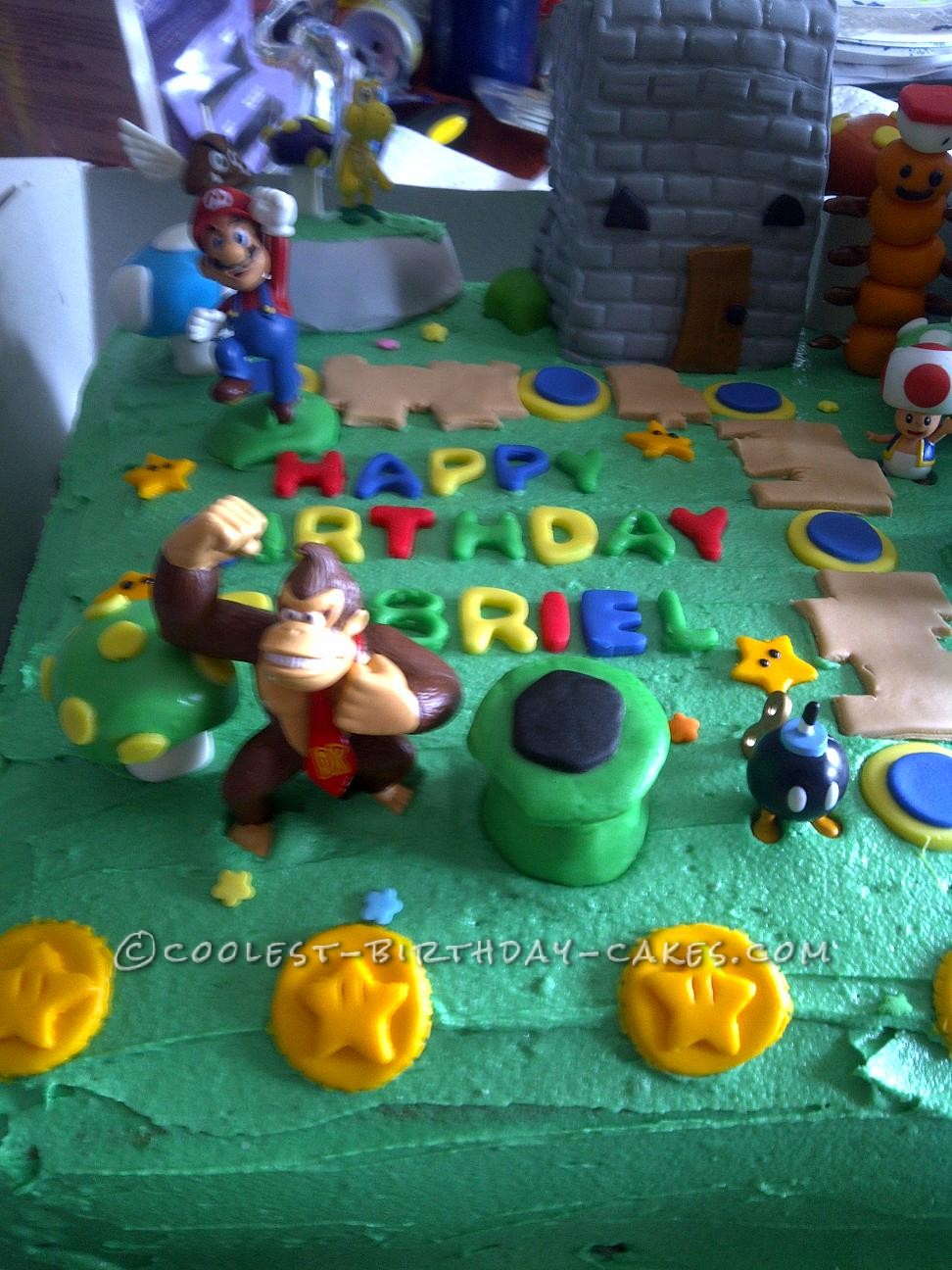 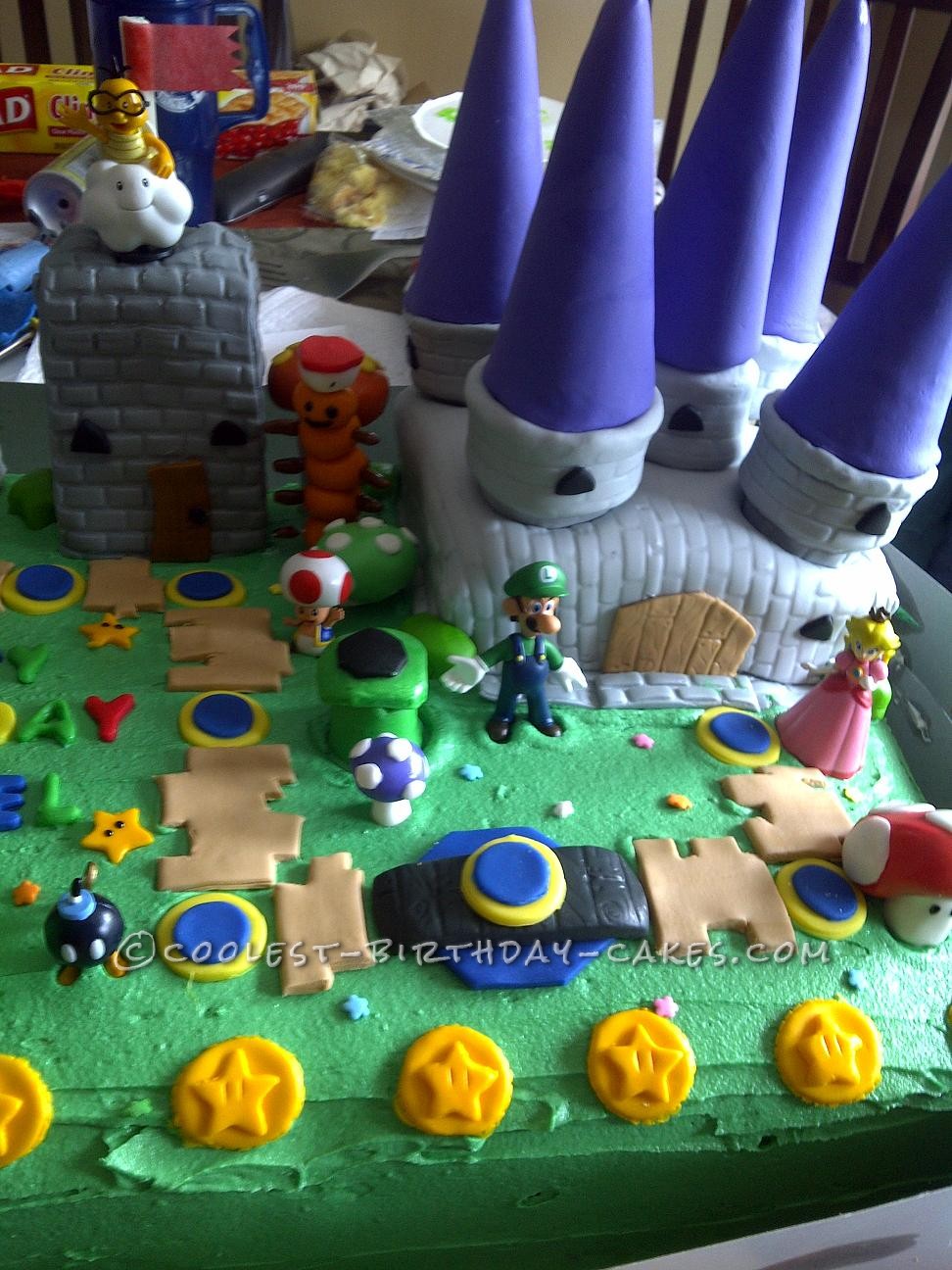 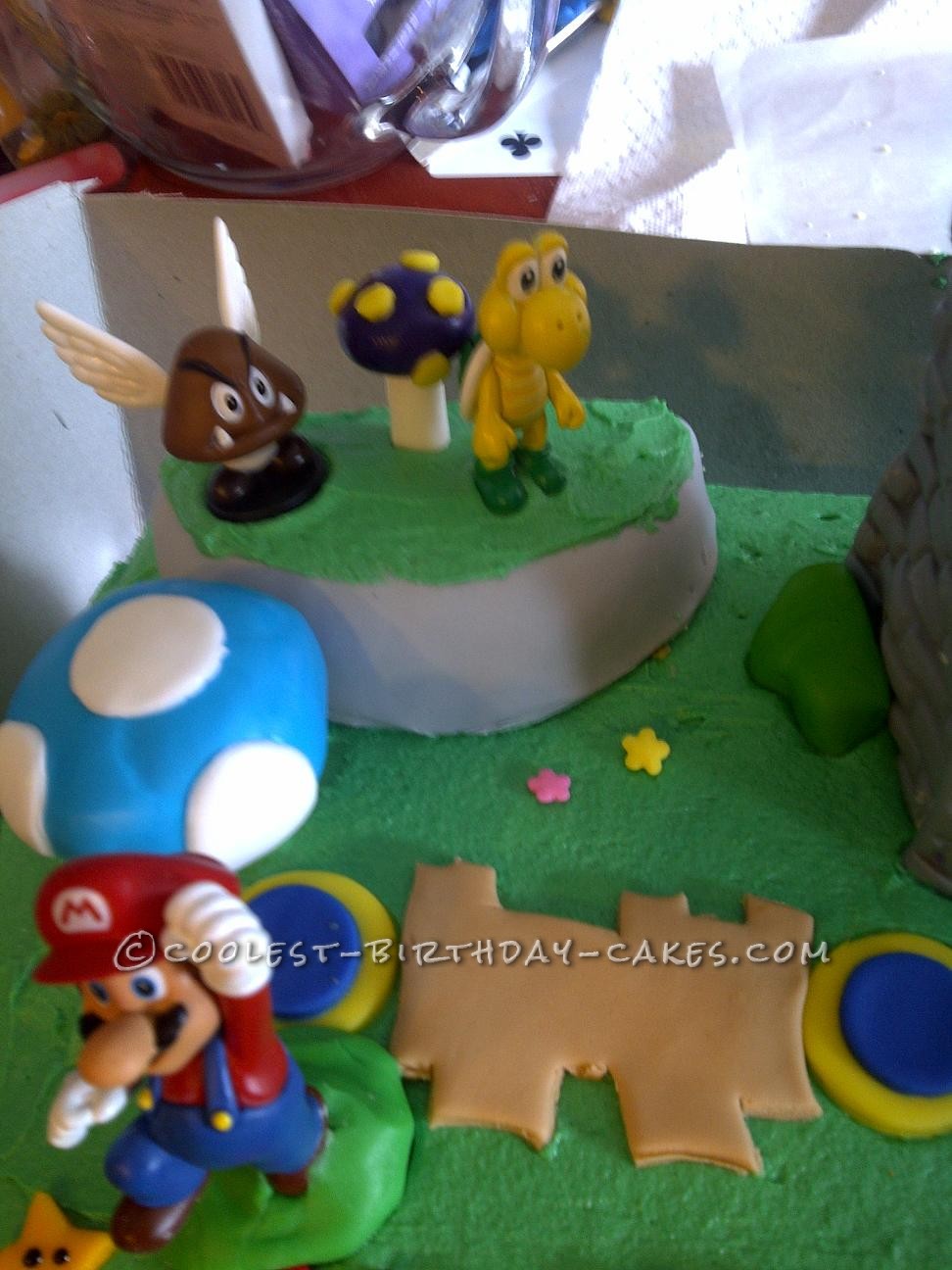 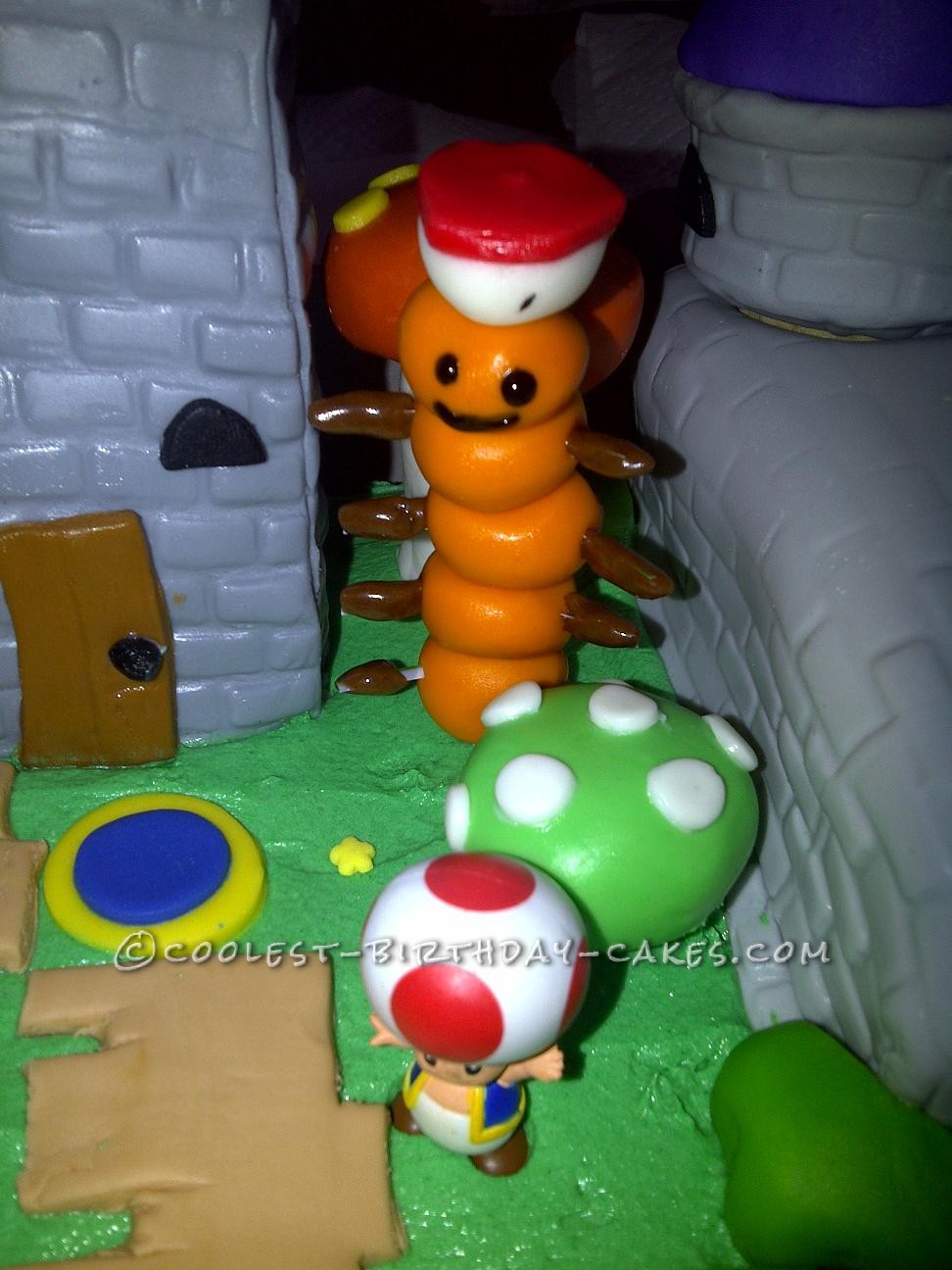 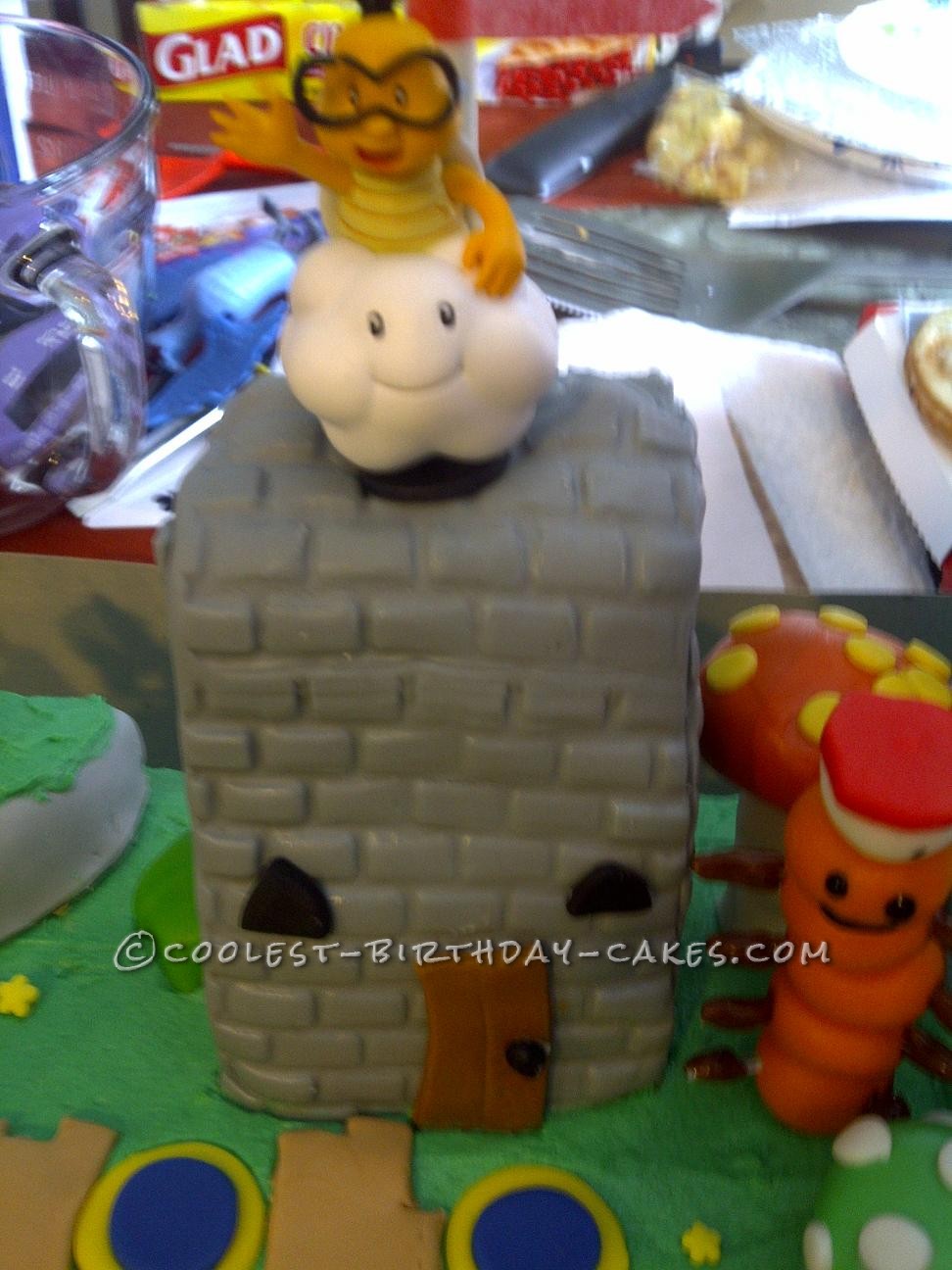