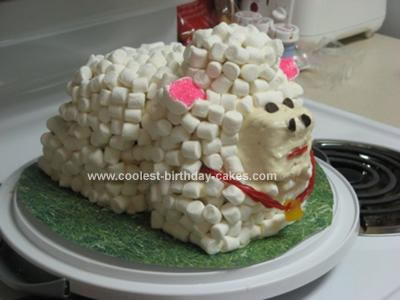 This Marshmallow Sheep Cake is made from two pound cakes using loaf pans and one cupcake. After the cakes were baked and cooled, I cut into each side a little so the cakes looked like they had legs coming off each side. I then used buttercream icing and stacked the cakes on top of each other. The top cake should overlap on the front for the face. I then covered the cake in buttercream along with the cupcake and placed the cupcake upside on the front for the sheep’s head.

I then covered the cake in miniature marshmallows. I used 1 large marshmallow cut in half and the inside dipped in pink cake sprinkles and placed on for ears. I left the face with just buttercream icing and used chocolate chips for the eyes, and licorice for the mouth and cowbell.

I got this idea from a magazine and used it for my daughter’s barnyard themed birthday party.