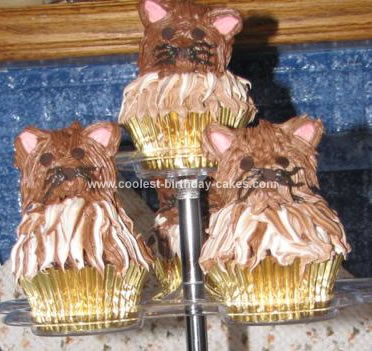 My daughter really wanted to have a hamster birthday cake, I decided to do cupcakes. The body of the hamster uses a regular sized cupcake and the face is a miniature-sized cupcake layed on its side.

I used a colored miniature marshmallow for its nose and a pink marshmallow cut on the diagonal to make his ears. When placing the mini cupcake and marshmallows I piped a small amount of icing on to help make it stay in position.

After putting all the pieces together I iced the whole cupcake with the star tip to make it look like hair, icing just around the ears and leaving a tiny bit of the pink marshmallow showing. The body was iced using 2/3 vanilla and 1/3 chocolate frosting in the decorator bag to make it look like her hamster.

I then added mini choc chips for the eyes and the tip of the nose. I piped on whiskers around the nose.

These were actually very simple and quick to make up. My daughter loved them and so did her friends.

Now This is a Hamster Cake