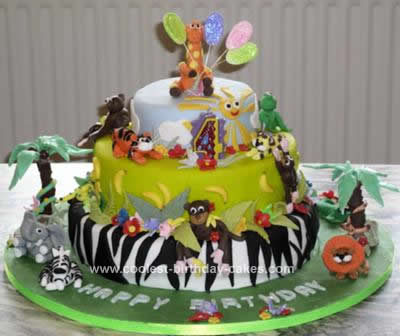 I created this Homemade Monkey Jungle Cake for my wonderful granddaughter for her fourth birthday.

This is the first time I have attempted to make a novelty cake with fondant and it was a real labour of love.

I spent a month and many attempts to make the animals from fondant and had a lot of fun as well as making loads of mistakes. In the end they turned out fine. I also used sugar paste to make butterflies, leaves and flowers and used edible glitter to decorate.

First of all I covered the cake board with green fondant. I then dowelled and stacked the cakes. Then the fun began: The middle layer was decorated with monkeys and other animals eating bananas and climbing up the sides. I covered the join with butterflies, palm leaves, ferns and flowers and attached with sugar paste dipped in egg white to create a glue.

The top layer I decorated with a smiley sun and clouds and popped a Giraffe on the top holding a bunch of sugar paste and glittered balloons. Once the cake was decorated I decorated the cake board with palm trees, animals and Happy Birthday letters which I made from sugar paste.

I had the best fun in the world making this cake and would love another excuse to make another! 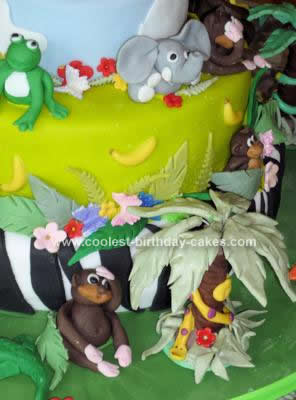 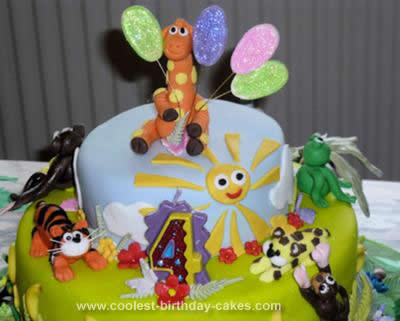 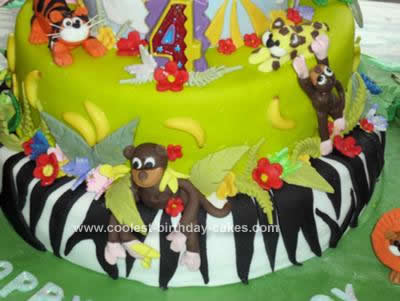