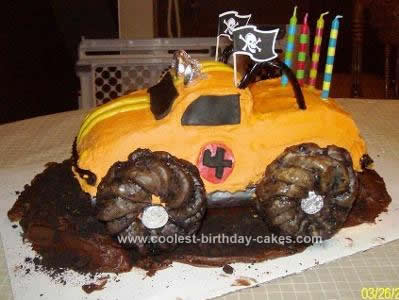 I thought about what Kaedan would want on his Homemade Monster Truck Birthday Cake Design. I used a Wilton car cake pan. Used a yellow cake mix with choc chips, sour cream, and pudding added. Kaedan and I made the orange frosting. The tires were Krowler donuts which I sprayed with black frosting glaze I bought at a craft store.

I put the cake on a cardboard and balanced it on 2 toilet paper rolls wrapped together to give it height for the tires to look right. I used left over cake, icing, and Oreo cookie crumbs for the dirt track (which with frosting under the rolls) kept the truck in place.

I rolled the windows and #4 out of black fondant.

The racing stripes are softened yellow Starburst. Rolled and cut with a pizza cutter. The red circle is made of softened red Starburst. I used Hershey’s kisses for the lights on top of the cab (obviously not a monster truck person..don’t know the name of those), M&Ms for the headlights and tail lights. Licorice made the roll bar and the fenders….pirate flags to add some fun…(kind of like the Monster Truck in Herbie Fully Loaded).

Found these cool checked candles for the final touch.

And Wallah, Kaedan has a GREAT Monster Truck Birthday cake! 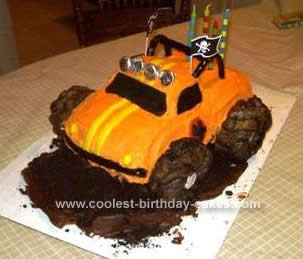 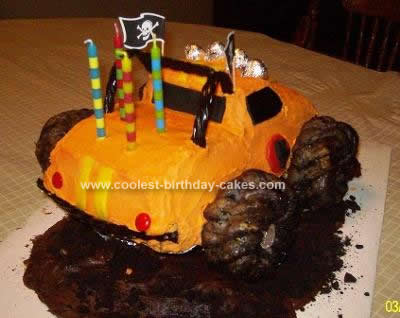