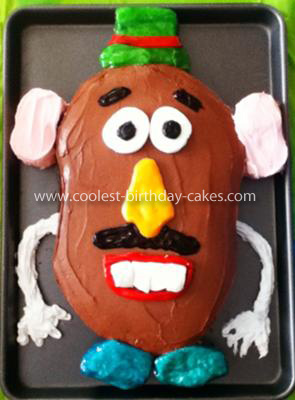 Driven by my 3 year old’s obsession with the Toy Story movies (includes sleeping with a Mr. Potato Head each night), we decided to make his party with a Toy Story theme. So, trying to be somewhat practical I thought that Mr. Potato Head would be the easiest to re-create.

I started this Homemade Mr. Potato Head Birthday Cake with a chocolate cake with hot coffee recipe our family likes to use. The chocolate cake was made in a 9″x13″ pan and then after cooling down, I put the cake in the freezer to harden a bit. I trimmed off the corners to create a potato like cutout.

My sister helped me decorate the cake. Chocolate & vanilla frosting was mixed to lessen the dark brown chocolate tone to a color more in tune with Mr. Potato Head’s skin tone. We added over-sized marshmallows to create the ears and covered them with pink vanilla frosting. The nose was made of melted orange starburst candies and free formed into a large nose. The eyes & teeth were cut from the same marshmallows as the ears. I used a rolled fruit rollup for the outline of the lips. After some discussion we decided to put a top hat made out of 3 rice krispie cereal bars as well as the shoes. Each were covered in colorful fruit rollups to give the accessories color. After adding some gel icing for the mustache and eyebrows we were satisfied with the results and put our decorating ideas to bed. My son and daughter were most impressed with the Mr. Potato Head cake, however, each asked the same question separately, “where are his arms?”. Not to be deterred in completing the cake , I came up with the idea of using chocolate licorice sticks with some white frosting over top of them to create the arms and hands. Happy and content the cake turned out pretty well.

As an added touch I made some cupcakes out of a white cake and decorated them with a neon green frosting, some mentos for the eyeballs, and fruit rollups for the pointed features of the aliens from Toy Story. These flanked the Mr. Potato Head cake (they become his adopted children in the 3rd movie) awaiting THE CLAAAW! 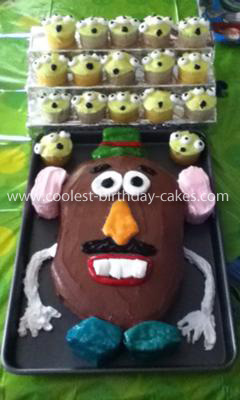