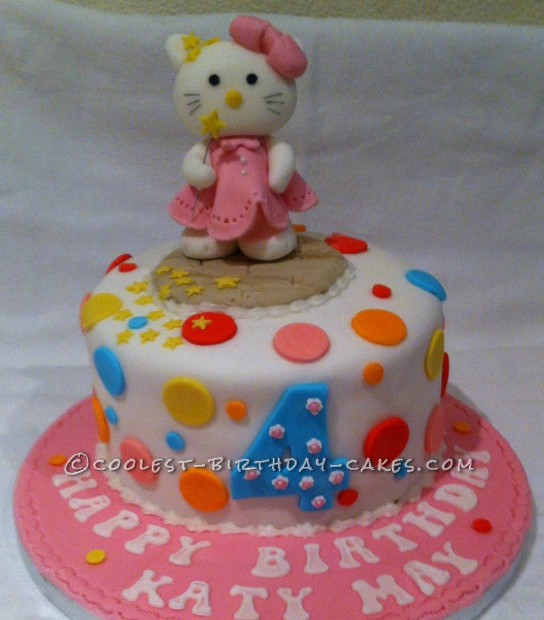 My friend’s granddaughter wanted a Hello Kitty cake made for her 4th birthday. She also loves Mr. Tumble so this is what we decided to make for her.

I had to make the kitty first so it would harden and be ready when I started decorating the cake.

I first made the body of the kitty in white and shaped the legs. I set this aside for a while to harden slightly before adding the dress in pink. I then made the head, attached some ears and, attached a pink bow by the one ear and attached a yellow nose. Next, I made the arms in white and in one of the hands I made a hole with a wire to attach the wand later. Then I made a number 4 in ice blue and set it aside for a few days to harden.

It was then time to make the cake. I baked a 7″ round vanilla sponge and when cold I filled it with buttercream and jam and then covered the whole cake in buttercream and placed in the freezer to chill.
when chilled, I covered it in white fondant icing and then covered the cake board with some pink fondant icing. I set this aside for a few hours to harden slightly. Meanwhile, I coloured some icing in ice blue, orange, red, pink and yellow and I cut out some large circles like the ones on Mr. Tumbles’ spotty bag. I also cut out some small stars in yellow and attached one of the yellow stars to a wire for the wand and laid it flat to dry out.

All that needed doing yet was the wording on the cake board and the cake was finished.