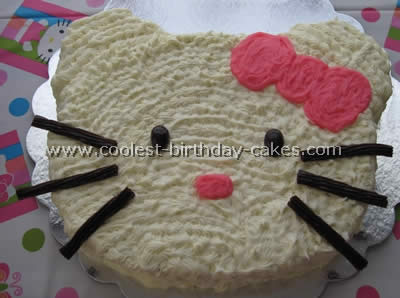 I actually got this cake idea from your website for Hello Kitty birthday cakes. I put two boxes of confetti cake mix into a 1/4 sheet cake pan. Once done put it in the freezer for a few hours to help with the cutting. I then shaped the oval face and used the extra cake to piece together ears. I used a star tip all over the entire cake using store bought icing.

The whiskers are licorice, the eyes are chocolate covered almonds and the nose is pink icing. I did the bow in the pink icing. This was my first time making any kind of character cake and I think it turned out pretty well. There are no cake pans for Hello Kitty and I wanted a cake for the theme.

For my daughter’s seventh birthday I made a Hello Kitty cake. I got the idea from this site for Hello Kitty birthday cakes. I drew a picture of Hello Kitty on cardboard, cut it out, froze my cake over night and cut around the cardboard. I did the outline on the cake in black first then filled in all the color with a star tip.

I used jumbo jelly beans (found at Hobby Lobby) for the eyes and nose and black licorice cut to size for the whiskers. Everyone thought it was from a bakery and it tasted great! This was my first time doing a cake like this and it was a lot easier than I thought!

We felt that Hello Kitty needed fur and shredded coconut would be the best! We made two round coconut cakes, cut each in half and put orange butter icing between each layer (butter orange zest sifted icing sugar to taste). Then drew a HK template from greaseproof paper and placed on top of cake and cut around, basically you need to make the bottom part oval-like and have two pointy ears. We got ideas for Hello kitty birthday cakes from this fantastic site.

The meringue coconut icing: 3 egg whites whisked to soft peaks. In a saucepan heat 3/4 cup caster sugar, 1/4 cup water, 1/4 teaspoon cream of tartar and 1/2 teaspoon vanilla essence to boiling and let to simmer three minutes then add to the whisked egg whites with motor running. Kitty’s bow was made from white ready to roll icing colored pink then used a fudge icing pen to write message on it and icing sugar. Readymade flowers were placed next to the bow. Eyes were chocolate fudge, nose two yellow Smarties and whiskers orange chocolate matchsticks.

I tested several home made Hello Kitty birthday cakes for daughters first birthday and decided I liked the store bought Funfetti Cake mix best. Also tested frosting recipes and the Wiltons White Frosting recipe had the best flavor – half butter half Crisco. But you must keep it covered with a damp cloth in the bowl when not frosting or it will crust over.

I divided two cake mixes between an oval and two 8″ round cake pans. I wanted the oval and one round to be thicker to feed more people and used the third for my daughter’s personal birthday cake. Using a heart shaped paper template on one 8″ round cake I used the scraps for the ears, hands and feet. Jelly bean eyes and nose and tube frosting whiskers, frosting bow with jellybean knot.

I used a cake mix and baked a 9″ round cake and 12 cupcakes as directed for Hello kitty birthday cakes. The cupcakes cook quicker than the cake so remove earlier from oven. I then froze the cake overnight to make for easier cutting and decorating. I cut the round cake more into an oval and used the top and bottom scraps to make the ears and bow. I put a thin layer of icing between the ears and head to keep attached. I then frosted the sides and top of the cake with the white store-bought icing. I used a hot metal spatula to smooth the top and edges of the cake. I colored some of the icing pink, put it into a plastic baggy and cut of the corner of the bag. I them applied the pink icing for the bow and to write on the cake.

I used jelly beans for the eyes and nose and black licorice (cut into quarters length-wise and in half) for whiskers. We had extra candy and decided to make a mini-kitty cupcake for each guest so we could keep the cake for her actual birthday with our family. We cut the jelly beans in half and the licorice into tiny pieces. To make the ears we just added extra icing and pinched the cupcake wrapper to make them stick out.

I made this cake for my friend’s granddaughter as she really loves Hello Kitty. I started with a square Victoria sandwich cake which was filled with buttercream and jam. I then blew up a picture of Hello Kitty and colored the icing to match accordingly. I guess it was a bit like doing a jigsaw puzzle as I just cut different sections of the picture out and then followed suit with the icing.

It was my first attempt at Hello Kitty birthday cakes and my friend’s granddaughter loved this cake!