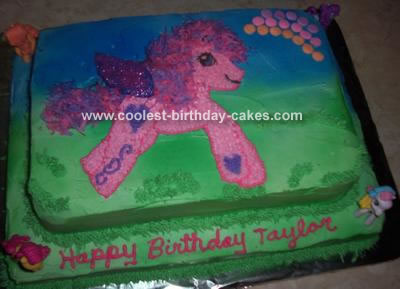 My granddaughter called me to ask if I could make my 6 year old great-granddaughter a My Little Pony cake and she wanted it to be a Pegasus pony. So after searching the net and checking out your site I came up with some ideas. I then searched for a picture of a pegasus pony. I found a drawing of one and used that as my template.

A big party was being planned so I needed to make a cake big enough for all. So, I made the bottom of the cake in a 12×16 cake pan and the top layer in a 9×13 pan. I covered both layers with a buttercream icing. I sprayed the top half of it with Wilton’s blue cake spray and the bottom half with green spray to make it look like sky and grass. I traced the pony on to the cake using a toothpick.

I originally planned to make the pony white like the My little pony pegasus star catcher but the day I was making the cake my granddaughter called and said her little girl wants a pink pegasus pony so of course I changed my plans.

I bought some cotton candy that I planned on using for the mane and tail but it didn’t work too well so I opted for flaked coconut which I colored pink and purple. I just wish I would have had the tail hanging down more and a little more graceful but once on the cake you can’t move it because it pulls the color spray off the cake. I used a little fondant to make the wing and sprinkled it with edible glitter.

For the eye I cut one off of a picture of my little pony and laminated it. I bought some mini ponies to put on the corners of the bottom layer of the cake. My granddaughter and Great granddaughter loved the cake. Everyone else at the party seemed to really like it too.

Coolest My Little Pony Cake for a 6 Year Old