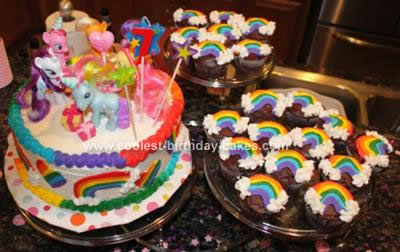 My daughter wanted a Homemade My Little Pony Rainbow Cake for her birthday, and her favorite pony is Rainbow Dash, so we went for a rainbow themed cake.

The cake is one I saw some time ago on Martha Stewart’s show. A Google search for “Martha Stewart Rainbow Cake” yielded the recipe and a video of the episode. Essentially, it’s a white cake mix, but I wasn’t sure how much batter a boxed mix would make, so I just followed her recipe. It turned out the size of a regular two-layer, nine inch cake, so you could use boxed mix and just divide and color the batter. We wanted some chocolate too, so we made cupcakes from a boxed mix for variety.

I used the Wilton bright gels to color the cakes, icing and fondant. They sell a pack of brights which has 8 colors and works perfectly for this. The white icing on the cake is a Swiss Meringue Butter cream (also on that Martha Stewart page). I’d never tried making this before, but I LOVED it. It wasn’t nearly so sweet as regular butter cream.

For the rainbows and hearts on the cake, I colored prepackaged fondant with the Wilton gels. I rolled out a skinny piece of each color (like making a snake out of PlayDough) and put them next to one another on a cutting board. When I flattened them with a rolling pin, they smooshed into one another. I cut the hearts with a small cookie cutter. For the rainbows, I discovered that I couldn’t shape the strip once it was flattened, so I shaped them into an arch and then rolled them out already in that shape.

The ponies on top of the cake were some my daughter was getting for her birthday, so I opened them early and used them for decoration. She was thrilled.

Thanks for taking the time to look at our Rainbow Dash My Little Pony cake. 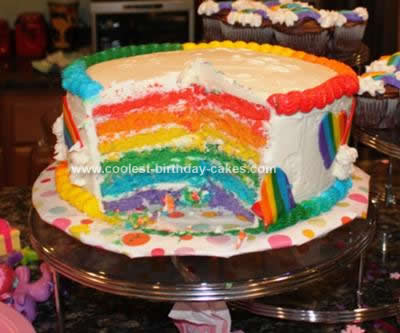