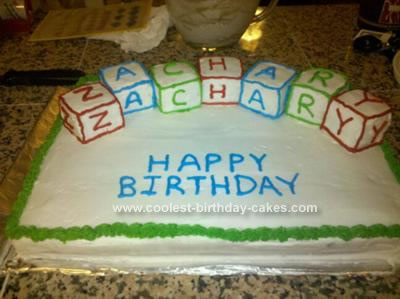 I made this homemade name alphabet cake for my son Zachary’s 1st birthday. I wanted something different from the giant #1 cake I’d done for his sister’s 1st birthday but that was still a “little” kid cake. Plus we wanted to keep the decorations relatively simple and weren’t really going with any particular character theme. I saw the blocks done for a baby shower cake (on this site – thank you for the inspiration) and I thought it would work well.

We were expecting about 50 guests so I baked an 11×13 cake- ½ yellow and ½ chocolate. I frosted the cake w/buttercream frosting. For the blocks I decided to use rice krispie treats. I made an 8×10 pan of those then using an actual letter block cut a square about the same size. I used 3 squares for each block and mushed & trimmed them until they were a good square shape. I frosted each of those w/white buttercream frosting on 5 sides and let set. I mixed up the 3 colors I planned to use. I started by doing the lines along the edges and then wrote a letter on each block on 5 sides. I let those firm up in the fridge and then I carefully transferred them onto the cake.

I decorated the edges of the homemade name alphabet cake & wrote “Happy Birthday” and it was done. I did do a trial run of one letter block a few days before to decide what size tip to use and how best to hold it. I ended up using a #4 tip I think for the edges and letters. I also traced the footprint of this and cut out 7 of them to get an idea of how to space/place them on the cake and figured that out using the empty cake pan. I knew once I put the blocks on it would be tough to move them so this was a big help to have done before.

I baked a batch of cupcakes to go with the cake just in case we ran out. I made one of them extra big and frosted that white on top & with a big “Z” and gave that to my son to smash & eat. Lots of compliments on the homemade name alphabet block cake and not too much left over.