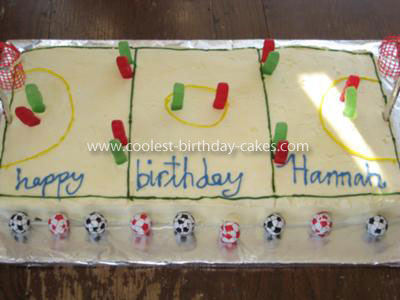 If you have lived in NZ you’ll know that a huge percentage of girls play netball as their winter sport. The NZ rep team are the Silver Ferns and hopefully they will win the world champs tonight against Australia.

Anyway this is a netball court with the two teams in their starting position made with jelly babies, the balls are chewing gum soccer balls but for the purpose of the cake they are netballs (very simular to soccer balls).

I made two packet cakes in square tins and joined them together to form the rctangle shaped netball court on the cake board. Iced the cakes with butter cream icing and I drew the netball court with icing Gell pens. The netball goals are iceblock sticks covered with tinfoil and the nets are made of onion bag attached by stapling on.

The 9yr old netballer loved her Netball Cake and so did all her friends who also play.