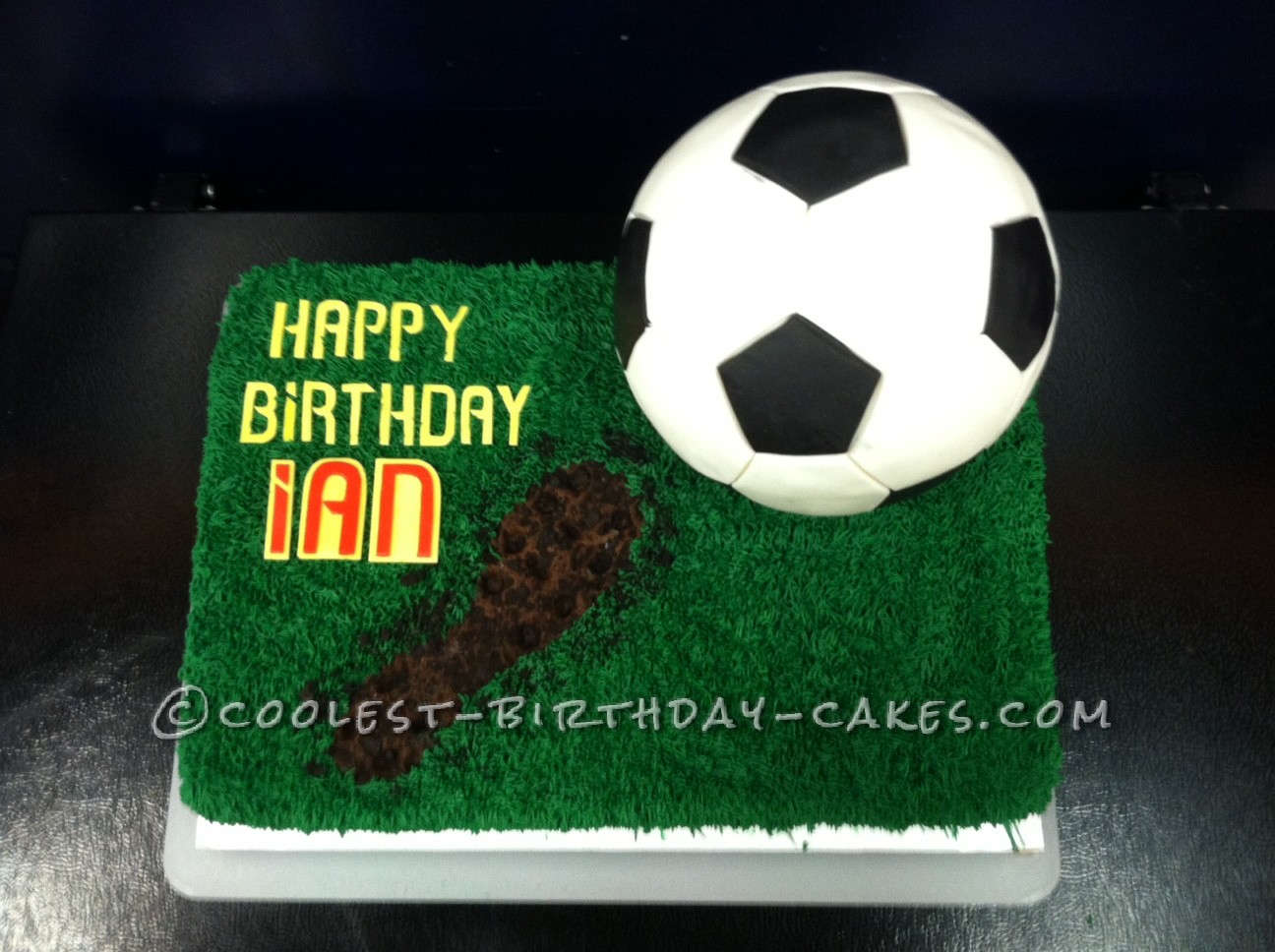 I began by making two 12×18″ yellow cakes.  Each cake was made with 14 cups of cake batter (approximately 3 boxes of cake mix).  Once the cakes had cooled, I wrapped them in plastic wrap and aluminum foil, and put them in the freezer until it was time to assemble the cake.

Satisfied with the shape of the ball, I covered it with a thin layer of frosting (also store bought), and then covered the ball with two pieces of fondant (one to cover the top half, and one to cover the bottom half).  Feeling totally accomplished, I went to bed.  When I came downstairs the next morning, the “ball” had sunk upon itself, and now looked like a deformed snowman head.  It seems that the weight of the Rice Krispie Treats was just too much, and this was not going to work.

As I was on the verge of completely freaking out, I had an epiphany, and sent my husband to Michael’s to pick up a Styrofoam ball.  Then I let my 3 yr old daughter go to town on the giant Rice Krispie Treat clump.  While she was stuffing her face, I covered the Styrofoam with a thin layer of frosting, covered the top and bottom half with a layer of fondant, and then used the soccer ball pan to estimate the sizes of the black pentagons and white hexagons for the final layer of fondant.  I started at the top of the ball, pasting on the black pentagon, and worked my way down and around the bottom of the ball, trimming the shapes to fit as necessary.  I had to stop halfway through to let the fondant dry overnight, so that it wouldn’t get dented as I moved the ball around.  Was using Styrofoam cheating?  Perhaps – but it looked AWESOME!

Once the ball was finished, I moved on to creating the soccer cleat print.  After spending too much wasted time on the internet looking for a non-existent image of a muddy cleat print, I realized that I could create my own cleat print using my son’s soccer cleat and some Play-Doh.  I made a thick layer of Play-Doh and then shoved my son’s shoe all the way down into it.  Once I removed his shoe, I was left with a beautiful cleat print.  I cut out the shape of the cleat, let the Play-Doh dry overnight, and then used the dried Play-Doh as a template for creating the print out of fondant.

I started with a thick layer of brown fondant, spread crushed Oreo’s on top, and used a rolling pin to smush the Oreo’s into the fondant.  This ended up looking very much like dirt/mud.  I cut the cleat shape out of the fondant, and using the Play-Doh template, estimated where the individual depressions from the shoe spikes would be.  Using different knife ends and random paintbrush ends, I was able to re-create the depressions.

As for the letters, I found a Major League Soccer (MLS) font on the internet and printed out the letters that I needed.  I glued the letters to pieces of cardboard and created a template of each letter.  I then used the templates to cut the letters out of fondant.

Assembling the cake was quite easy.  Once I removed the cakes from the freezer, I leveled each one, and stacked them with a layer of chocolate frosting in between.  I then covered the entire cake with a crumb coat of green frosting.  I decided where I wanted the fondant cleat print to be positioned, and scraped out some of the cake in that area (using a grapefruit spoon) so that the cleat print would lie flush with the cake.  This way, it would look like it was lower than the grass and be more realistic.

Using a Wilton 233 grass tip, I spent the next 3 hours piping the green frosting onto the cake, starting with the bottom of the sides and working my way up onto the flat top of the cake.  I eventually had to put on rubber gloves because the frosting was coming out the back end of the piping bag and staining my hands.  After all the grass was completed, I laid the fondant letters onto the grass and took some Oreo crumbs and spread them around the edges of the cleat print to make it look more like dirt.  I then inserted a short wooden dowel into the soccer ball, and stuck the other end of the dowel into the cake.

To say that people were impressed would be an understatement.  But the main thing was that my son LOVED it!!