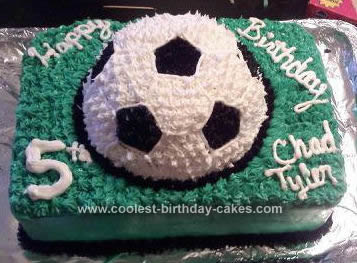 I’ve always liked decorating cakes, so when my best friend asked me to make her son’s 5th birthday cake, I jumped to the opportunity. He had just recently joined soccer so when I asked him what kind of cake he wanted generally he said “A SOCCER CAKE”! I found this website for inspiration and then continued to do my own variations of a Soccer Birthday Cake Design from all the other cake descriptions I read.

The bottom layer is two 13x9x2 cakes stacked on top of each other, and the soccer ball is a cake I baked in a small Pyrex bowl. I add a box of pudding mix to all the cakes I bake and it makes them so moist! I used one box mix per cake (the bowl took almost a full box).

When I stacked it I put about 6 straws right through the top of the ball straight through the cake to the bottom and then just cut off the part that was sticking out. This gave the cake more stability. To frost it I crumb coated all of the cake. The bottom green frosting is actually lemon frosting I just added green to get the deeper color. For the soccer ball I went online and printed out the pattern for the ball right from Wilton’s website. I cut out the pieced and stuck a tooth pick right through the center and then moved it around the cake while I used another toothpick to draw the outline of the shapes. I used the black frosting in the tube and just put my own tips on it. The white I used was the Wilton decorator frosting in a can (from Wal-Mart) it’s about the same price as regular canned frosting, but it’s much stiffer so it doesn’t slide when applied to the sides of a cake. It’s located in the craft/cake decorating section, and can be colored if you need different shades; personally I prefer the color gel in the little small cans. You need much less the food coloring, and it doesn’t make the frosting so watery. I added the writing myself just because, you could skip it. (Personally I’m not fond of where I placed the writing but it’s where my BFF wanted it and so that’s where I placed it).

All in all it took about 3 hours to assemble and decorate. I have also learned since doing this one that you can go to your local craft store and buy a thick foam/cardboard poster board for 2 dollars to use as the bottom instead of the foil covered baking pan as shown in picture. My best friend’s son was AMAZED by this cake and everyone said how awesome it looked! We even lifted the soccer ball right off the cake so he could have his own little cake!

Thanks coolest birthday cakes.com for all the ideas you’ve given me!