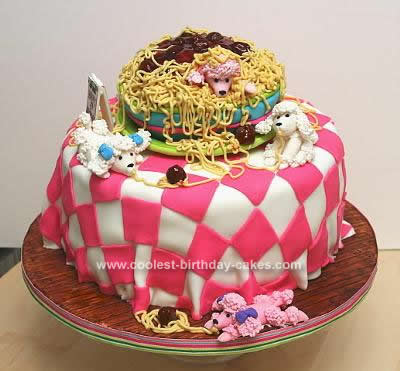 I began by modeling some poodles out of a mixture of fondant and gumpaste. I did very basic body structure then used my garlic press to make the fur and a toothpick to transfer rows of it onto the poodles. These sat for several weeks to dry. I began working on the bowl and plate so that they would also have time to harden. I picked a plate and bowl in our kitchen, coated them with plastic wrap and sprinkled with corn starch. I rolled out sheets of the fondant mixture and used coils to make the edges appealing.

Next, I created a cake board, out of foam core and strips of fondant to cover the surface. I mixed some vodka with few browns and started painting the food coloring onto the new floor until I achieved a desired darkness. I made a basic stacked cake, three tiers, 12″ rounds. I think it was chocolate with oreo cookie buttercream.

I started to decorate the bottom cake by rolling out a HUGE piece of white fondant and attach pink squares to it to make a tablecloth like pattern. It was extremely difficult to actually drape that onto the cake without losing squares, but I managed with the help of my husband. The spaghetti was just lightly colored buttercream which I squirted out of a pastry bag with a small round tip. The “meatballs” were actually small, chocolate covered caramel balls, which is beat up a little so that they would be perfectly round, and would have some texture. I melted some seedless raspberry jam and mixed it with the balls to make the sauce.

I was actually surprised at how well it worked. The last touch was a little placard that read Menu and Happy Birthday. My daughter LOVED her cake and it’s definitely been one of my favorites to do. 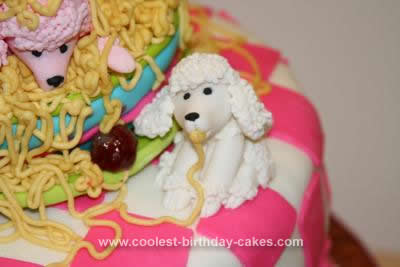 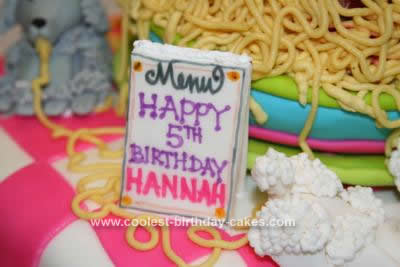 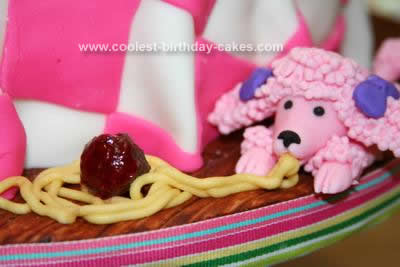 3 thoughts on “Coolest Oodles of Noodles and Poodles Cake”