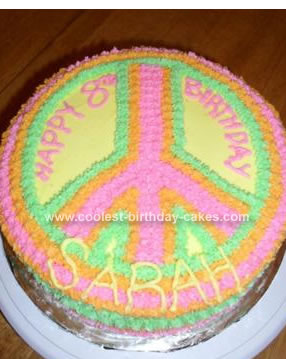 My daughter is into the peace sign craze, so we did it as the theme for her 8th birthday party. For her cake, I tried to keep it simple, but it still took two tries to get it right! She had a family party, and then one with friends, so I had to make the cake twice!

I baked 2 9-inch round cakes and filled them with butter cream to make a layer cake. I then made icing in bright pink, yellow, green and orange to match her party decorations. I iced the cake yellow (I thought that would be the best background color). With a star tip, I did a border on the top and bottom of the sides with all three colors, (pink, orange and green, and reversed on the bottom so a bit of the yellow showed on the side of the cake).

I added additional borders again around the outside of the top of the cake in orange and green (next to the pink of the top side border). Then, starting in the center, still with the star tip, I piped a peace sign in pink (her favorite color) then outlined it, still in stars, with orange (her second favorite) then did a final outline in green. Then I wrote the birthday message with a round tip.

On the first cake, I did it inside the border, but put her name on the border on the bottom. I liked how that looked better, so on the second, I did the whole thing on the border! Oh, and for candles, I found bright neon candles that matched the colors of the cake!

It was a big hit! For the family party, I also made cupcakes that I decorated with swirls with the leftover icing, but everyone wanted the cake! 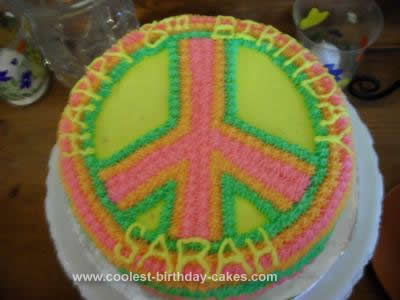