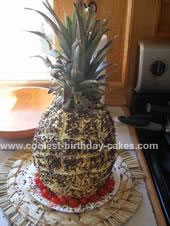 For my Grandsons first birthday, we decided to go Hawaiian-complete with a three dimensional Pineapple Cake!

After much thought and consideration about how this could be achieved, I finally came up with a plan. I baked the cake using two over sized Pampered Chef glass mixing bowls, one larger than the other. I used four boxes of pineapple cake mix (adding in chunked pineapple and cherries) and baked two cakes in each sized bowl. This allowed me to make a separate, smaller cake for the birthday boy.

Next came the frosting, which was basic whipped creamy buttercream mixed with yellow food coloring. After the cakes were frosted, I covered them in chocolate jimmies and used a straw to make a criss~cross design, topped it with a real pineapple top and garnished with cherries and Hawaiian flowers.

This was my first attempt, but I will perfect it with practice! It was really fun to make!