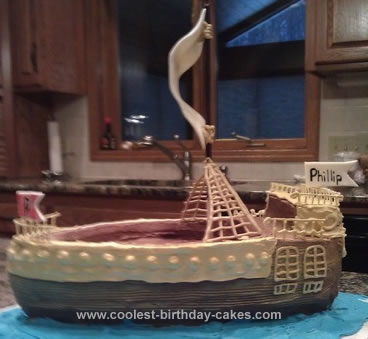 My son asked for a pirate ship cake for his 3rd birthday. We went online and looked at pictures of pirate ships, and I chose one with as simple a design as possible (not so easy since pirate ships are very intricate!). I used the picture as a template.

I baked a 1/2 sheet cake, cut it into thirds and stacked it to make a 3-layer rectangular cake. I used this as my blank “canvas”. Next I carved the shape of the boat. I used a sharp bread knife to get the general shape and then a smaller serrated knife for the smaller details.

Next step was to ice the cake. I used chocolate butter cream icing (I cheated and bought the icing at my local grocery store bakery!) to cover the boat, and used the ridged side of a small spatula to make the sides look like wooden planks (I think covering the cake with fondant would work really well, too).

For the sail and flags, I rolled out white fondant, cut to the shape I wanted, and let it dry for a couple days over crumpled newspaper. Then I attached it to a dowel with royal icing (I had painted the dowel black using black food coloring). The sail ended up being a bit heavy, and I don’t think it would have withstood too much moving around. I secured it a bit by piping some royal icing around the base where the dowel went into the cake.

Finally, I spread blue butter cream icing over the base of the cake board, and spread white icing over a corner and covered with sanding sugar to look like a beach.

My son absolutely LOVED the cake, and he was so excited to have a pirate ship cake for his birthday. If I had more time, I would have loved to add some details, treasure chest on the beach, shark in the water, pirate on the boat with a parrot, cannons, planks, the details could be endless! 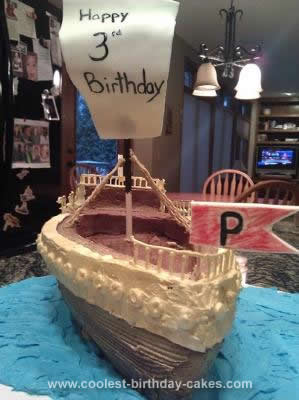 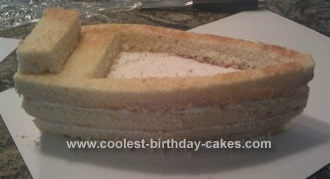