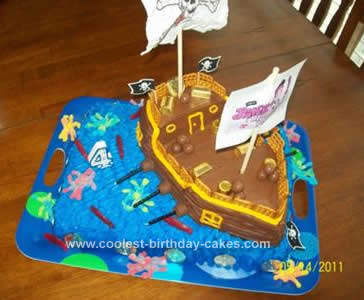 My son just turned 4 and wanted a Disney “Jake and the Neverland Pirates” birthday party. I could not find much of anything since the show is still so new. So I always try and get my ideas from this site. I did NOT want to go too much on the pirate side, as I wanted more of Jakes Ship. So this is what I did for my Homemade Pirate Ship Birthday Cake.

I baked 2 boxed cakes in an 11x15x2 Wilton Cake Pan. I also cooked 2, 13×9 cakes. A total of 4 cake boxes. I made a white icing that I tinted blue for water and a small amount for the yellow railing of the ship. I also made chocolate icing for the ship. The icing needs to be stiff like so you can pipe it out and it will hold its shape.

I set the 11×15 cake on a platter. I did a crumb icing with the blue (just a light coat to cover the cake and catch all the crumbs, but enough to cover since I am using a piping tip). I put 1 of the 13×9 cakes on a cutting board and shaped it into a ship. I first made the front with a triangle tip. I then cut the back and rounded the edges a bit. I then trimmed the side. BEFORE I set it on the cake I put the other 9×13 cake on another cutting board. I took the one I already shaped into the ship on top and cut the other exactly like it (be careful not to break it in the move).

For the Ship I iced the top with a smooth finish. For the sides I used a piping tip and make the look like logs. I put the square pretzels on the top of the ship to make the railing and then I immediately iced the top with the yellow to hold the pretzel railing. I bought Hershey’s treasures, whoppers for cannon which I stacked, and rolos for gold and arranged them on the top of the ship. With the yellow icing I made windows on the side of the boat, named the back of the ship with my son’s name, and also made a door for the upper deck. I purchased some cupcake paper at a craft store and they came with the mall flags on toothpicks. I purchase cake dowels for the poles.

I printed out a “Jake” logo from Disney Jr. and put it in the front. I also printed a Child like skull and made it larger than the Jake sail. My husband crumbled the paper and opened it several times to give it the “weathered” look. He then burned 2 small holes in it to make it look like it was hit by a cannon. On the side of the ship I unwrapped Rollo’s and put black candles in it. These can be lit to let your little one blow out.

My son loved this and all our friends were very impressed. It is a lot of cake, and you will be giving a lot away but it so worth it!! I hope this helps you as this site helped me!! Thanks & enjoy! 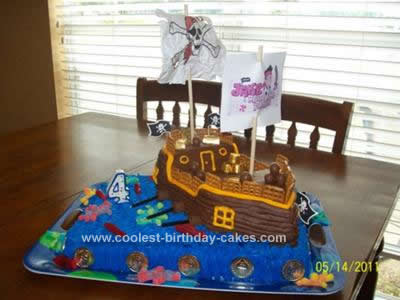 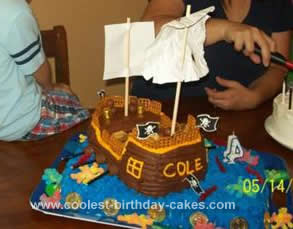 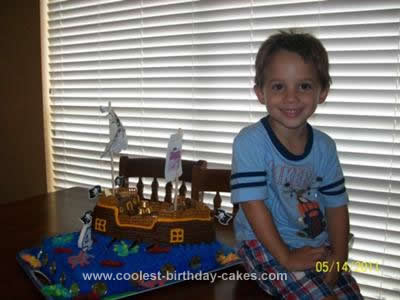