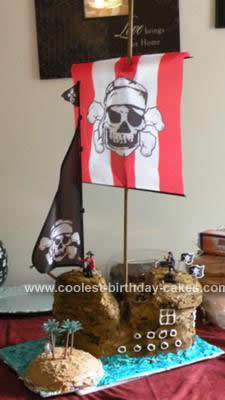 My brother is a Marine and hadn’t been home in a few years. Since he was going to be home for his birthday my sister in law wanted to throw him a surprise pirate party! So I researched pirate cakes and found a lot of great ideas on this site. This Homemade Pirate Ship Cake with Island Cake was a huge hit (and the cupcakes) with him and all his friends! I will list how I made it and my recipes for you

To start the ship I baked 5 (you need 4 on one “just in case) 13X9 sheet cakes, (make sure you grease and flour pans really good so cake comes out easy). I just used French Vanilla box cakes (normally I make mine from scratch but didn’t have time). I let them cool then ceran wrapped them, then wrapped them in foil and froze them over night. **A frozen cake is much easier to work with**. I unwrapped them, leveled them, cut the crust off and “dirty iced them” re wrapped them re-froze them (it’s important to dirty ice them so you wont have crumbs in your final icing).

Then I made the island, I was making Red Velvet cupcakes (from scratch) so I took a little of the batter and poured it in a small pirex bowl. I just kept checking it as it baked and, as with the sheet cakes, I wrapped and froze then dirty iced and refroze it. You can re freeze the cakes about a half hour before assembling them, the icing freezes very fast.

To build the ship: I used a cake board wrapped in foil (can be purchased at most craft stores), put a very thin layer of butter cream frosting (again home made recipe below) where the cake was going to sit and put my first sheet cake there. I then cut about a third of another sheet cake and added it to the front. I then cut the shape I wanted with my butcher knife by cutting the corners off the front and back to make the bow and stern. Then I (this is very important for later in the cake) made a template with cardboard of the front and back I then used those template to make the next layer by stacking another sheet (over the 1/3 piece so its stable) and adding the other third to the opposite side and used the template to trim again. For filling between the cakes I used raspberry jam. Make sure to make a “dam” around the edge of the entire cake before pouring the jam. I warm the jam (ahead of time) in hot water so its more workable and doesn’t cause you to get “crumbs.”

Once the base of the cake was assembled I put it in the fridge (the freezer would be better but I didn’t have room) and to cut and assemble the poop deck and bow. I wrapped the template in foil and used it to cut the first layer of the bow and poop deck (remember to dirty ice the ends you cut again) and then cut the top layer shaving off a few inches so you get the ladder look. I over hung the poop deck very slightly (to much and it’ll collapse). Again I used jam for the filling between the cakes.

Pull the base back out and use the templates as support by placing them on the bow and stern add a thin layer of frosting to the top and then stack the bow and stern pieces on. This will help prevent the cake from collapsing.

I then made a huge batch of butter cream and put some aside to pipe details and make the water. Instead of using chocolate we decided to make the butter cream and dye it a light brown. I frosted the entire cake (it took two batches of frosting) then I threw (not literally) in the fridge to harden a bit. Then I used a small frosting tool and make sideways striping to make it look like planks. Then brushed brown frosting coloring on the ship to give it the grainy look. I didn’t add the prow of masts until right before the party. The mast was a dowel I bought at a craft store and painted with the food coloring so it matched the ship. the figures I got at Michael’s they come in a tube. The sails come off a kite.

To make the island I used cream cheese frosting left over from the cupcakes (because it was a Red Velvet Cake.) I dyed the frosting brown and frosted the cake. I then sprinkled brown sugar on to give it a sandy look. The tube came with a skeleton holding a bottle of rum so we put him on the island and added the trees to complete the look (also at Michaels).

To make the water I used the left over butter cream and dyed it with the teal color and mixed it lightly so it had a marbled look. I spread it so it looked choppy like water then piped white on the tips of the waves and then spread it in just a little. (It also makes it so you don’t have to worry about hiding where the ship sits on the foil). I made it come up the front of the ship very slightly to give the effect of plowing through the water.

Keep refrigerated until about an hour before eating…butter cream needs to sit out and soften before you eat it and trust me its so much better than store bought stuff. I make it a bit firmer to so it holds its shape better.

1 cup unsalted butter (2 sticks or 1/2 pound), softened (but not melted!) Ideal texture should be like ice cream.

up to 4 tablespoons milk or heavy cream

Beat butter for a few minutes with a mixer with the paddle attachment on medium speed. Add 3 cups of powdered sugar and turn your mixer on the lowest speed (so the sugar doesn’t blow everywhere) until the sugar has been incorporated with the butter. Increase mixer speed to medium and add vanilla extract, salt, and 2 tablespoons of milk/cream and beat for 3 minutes. If your frosting needs a more stiff consistency, add remaining sugar. If your frosting needs to be thinned out, add remaining milk 1 tablespoons at a time.

In a medium bowl, cream together the cream cheese and butter until creamy. Mix in the vanilla, then gradually stir in the confectioners’ sugar. Store in the refrigerator after use.

3 14.5 oz cans beets drained and pureed (trust me you dont taste them…its a much healthier way to get the red cake than dumping a ton of food dye in)

Pour what you need in the Pyrex bowl and use the rest for cup cakes ( I got about 20 out of it). Cupcakes take about 20-25 min…the island cake took a while I didn’t time I just kept checking it. If the edges start to dry out cover with foil. I iced the cupcakes and sprinkled red sugar on top. 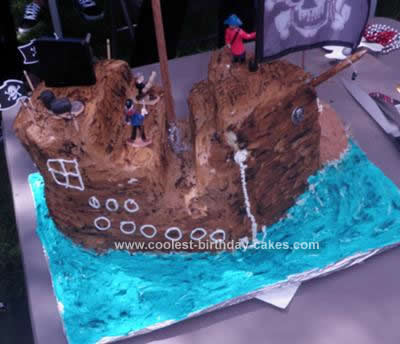 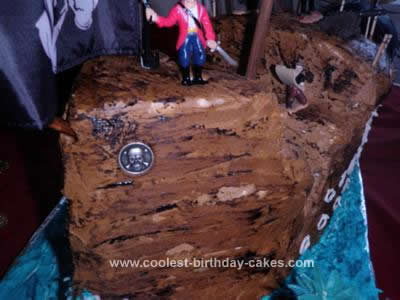 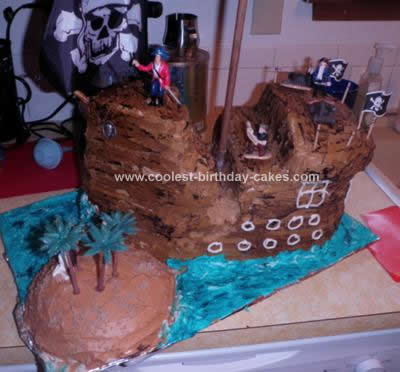