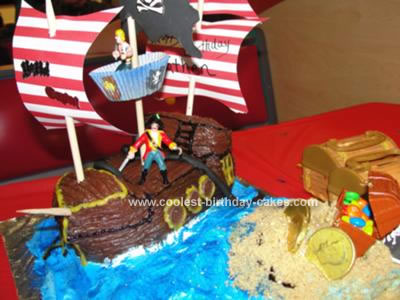 My little boy wanted a Pirate themed 4th birthday, so I wanted to make a Pirate Ship and Buried Treasures Cake. I looked at LOTS of pictures to get ideas of what I wanted to do and how I wanted it to look.

I made a 9×13 cake for the base with a boxed cake mix. I then made 2-9inch round cakes for the ship. I cut them in half and then started to shave off parts to sculpt to look like a ship. I built up the front and back to look like a real pirate ship.

I used Chocolate store bought icing for the 1st layer of the ship (crumb coating). Then I used Chocolate Buttercream icing to cover completely. Used a fork to make it look like wood planks.

I decorated with black, yellow and red sparkle gel for details. I used black fondant icing for cannon balls, shark fins, 2 octopus tentacles and an anchor. Rollos for cannons on the side of the ship.

I used whipped cream icing for the 9×13 base cake and used blue food color spray to look like the ocean. On one corner of the cake, I used graham cracker crumbs and brown sugar for the sand. I also used a small plastic treasure chest and filled it with colored hard candies as a little buried treasure surprise inside!

I went to the craft store and bought a couple different sheets of card stock paper for the flags. I bought pirate stickers that said, “Ahoy, Matey!”,”Yo! Ho! Ho!” and other pirate phrases to put on the flags. I used dowel rods as the masts and used a cupcake liner as the “lookout post”. I used my son’s plastic pirates that he already had.

I had SO MUCH fun doing this cake, even though it took me many hours to do. It just depends on how much detail you want to add. You can do it! 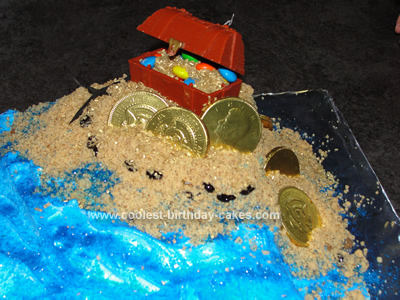 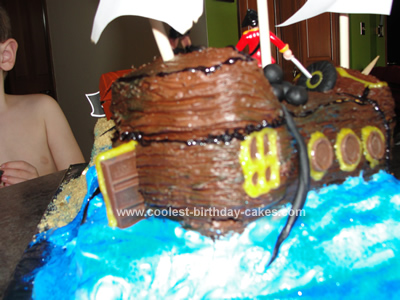 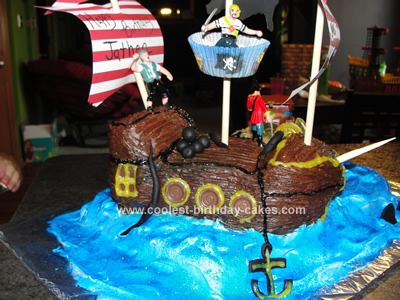