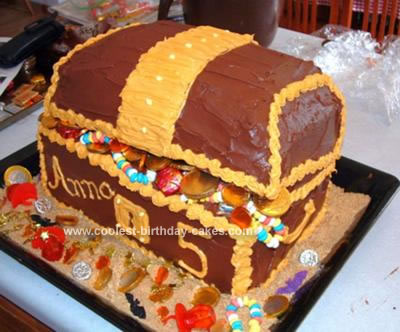 My daughter liked the Pirates of the Caribbean and wanted a Pirate theme for her 5th birthday. I created this pirate treasure chest cake based on some other pictures I had seen on the internet. I was able to find the chocolate coins for decoration at Walgreens and at the bulk bin section of a local grocery store (the kids were pretty excited about these).

I baked 2 9×13 chocolate layer cakes. I also baked a third cake using a bread loaf pan and 2 smaller loaf pans in order to make the top part of the chest. I basically just sliced and diced the little cakes to make the top angled how I wanted it. Frosting is the glue that held it all together. I used almost 5 cans of frosting.

To make the chest deep enough, I wrapped a 24 oz Frosted Mini Wheats cereal box in plastic wrap and used it as the bottom layer. I also stuffed the box full of paper so that it would not crush down under the weight of the cakes. I frosted it and then put one 9×13 layer on it. I did need to trim the layer to fit the box first. I then used those scraps on top of that layer towards the back part so that the lid would look propped open.

I then frosted all of that and put the next 9×13 trimmed to size layer on top. I did put some Reese’s peanut butter cups in the front to support the lid being open in the front. I did let the frosting dry for about an hour before I stuck a lot more candies in, so that they would not stick so much to the frosting. On top of the lid layer, I then put the big loaf pan layer in the center. I then sliced the little loafs on an angle (one side straight up and down and the other slanted like a triangle) to give the top of the chest the sloped appearance.

I used canned frosting for all of this. I then used a little canned white frosting that I tinted gold by using 1 drop orange and 3 drops yellow food coloring. I used crushed graham crackers for the sand and then put a lot of candy in the sand so that is would not be all sticky.

I bought my candies around Valentines Day because a lot of candies had gold wrappers. You could also use Rolos too.