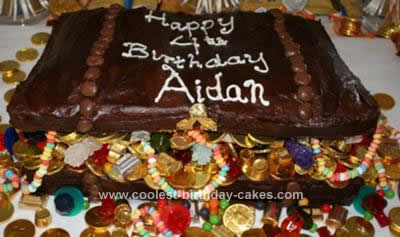 This was a pirate treasure chest cake for my son’s 4th birthday. It was fairly simple to make, but a little time consuming to decorate (but end result was worth it). I used 5 cake mixes to bake 4 9×13 cakes and two loaf cakes (in chocolate). I placed two leveled 9×13 cakes next to each other to form 18×13. I frosted between the two cakes to get them to stick. I then frosted the top of the layer with chocolate (but you could use whatever flavor you want).

I then took may loaf cakes and cut them at 45 degree angles to form a “wedge”. I placed the 45 degree wedges on top of the 18×13 cake layer (frosting all sides to keep it all together). I then took my last two 9×13 cakes (not leveled off) and placed them next to each other to form the top lid 18×13 layer. It is important to place the wedges in such a way that only a few inches are exposed on top and bottom layers of the treasure chest to place the candy. If the exposed top cake layer is not supported by the wedges, it will slump from gravity and want to break apart.

Once your cake is assembled, you’re ready to start frosting. I used dark and milk chocolate to get two different browns to look like wood. Frost all sides. I think I used approximately 5 cans of premade frosting. The treasure is made up of lots of different candies. The chocolate coins were the hardest to find during the summer. I also used gold foiled candies, candy rings, rock candies, candy necklaces, jolly ranchers and jaw breakers. I used milk duds to form the straps on the lid.

For the treasure chest lock, I used the foil of one of the gold foil candies and cut it into the lock shape.

Hint: if you have time, frost your cake the night before and let it sit overnight. This lets the frosting set a bit and will hold your candies better the next day. Also, the candies that are unwrapped (candy necklace, rings, and jolly ranchers) will become soggy if exposed to the frosting too long.

I placed the entire large cake on top of a parchment paper covered poster board from Michael’s and placed candies all around. I also used our own fake diamond paper weights as part of the jewels.

This cake was a huge hit and I received tons of compliments. It was fun and my son still asks to see pictures of his favorite cake.