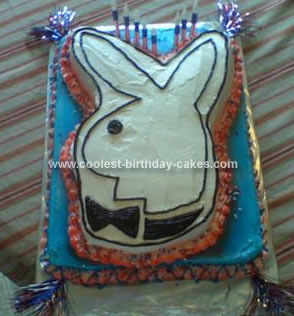 I made this Playboy Bunny Birthday Cake as a surprise birthday cake for my brother-in-law on June 7th, 2009. He’s former US ARMY, and thought this would be prefect for him and his personality.

I did use the Wilton Playboy bunny cake pan, however my first attempt at the P-bunny broke up at the ears, and down by the bow-tie. So for the second try, I used less water in the cake mix, hoping to give me a denser cake – which worked.

I made white buttercream frosting, and used the blue Wilton cake stray to set off the bottom cake from the bunny. I also used Martha Stewart’s patriotic cupcake toppers at the corners of the cake, and patriotic candles.

I’m no professional baker, I only make 4-5 family birthday cakes a year, but I thought this came out really well. My brother-in-law was very happy – to say the least.