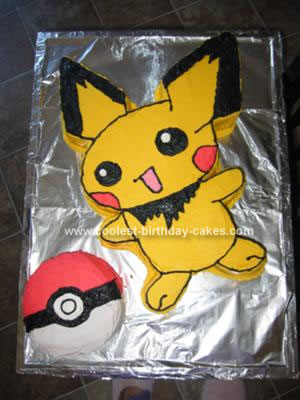 My son wanted to have a Pokemon party so I started looking for a cake. I decided to give it a try myself. I took a picture of his favorite character and enlarged the size to fit inside my cake pan. I had to do half first and then the other half, because of the size of the ears.

I used a homemade vanilla cake recipe for both cakes, baking them in two 13″ x 9″ pans. While the cakes cooled, I transferred the picture outline to wax paper. I used that as my cutting guide. The head and body were connected at the neck. The pokeball was made from scraps of cake, as an afterthought.

I used buttercream icing for everything except the black areas. I purchased some premade icing for the black parts because it is such a difficult color to achieve. I first iced the entire cake with the buttercream and then followed the picture’s details after that.