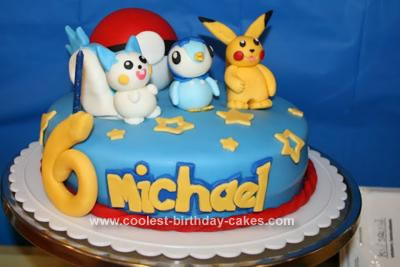 My son asked for a Pokemon party for his 6th birthday. So I browsed around the web at all the different cakes, and then combined the various pieces I liked to come up with my design of this Homemade Pokemon Birthday Cake.

I started by making my fondant about 5 days before the party to give myself time to make all the figures. I worked on a figure or so a day, til the day of the party. First I looked up pictures of the fondant figures I wanted, and did my best to copy them. In hindsight, I should have found a better Pikachu to model after, because I don’t think he actually looks like the real Pikachu, but he’s still cute.

All the figures are basically one round ball on top of the other, except Pikachu. But I think it would have been better to make Pikachu’s body round like the others, and then form small feet and attach them sticking out away from the body, rather than having his feet under him. The real Pikachu looks more like that.

And then it’s mostly about adding the details which are mostly simple shapes, triangles on top of the squirrel looking thing, and circles for eyes and cheeks etc. Just make little balls and flatten them. For the feet and arms, use a toothpick, or even a butter knife to push indentations, without actually cutting into the fondant for the details.

The squirrel tail was the hardest for me. It looks simple, but I just couldn’t get it right. I took a long piece of fondant, that was skinnier at the top, and then started rolling a swirl on top away from the body, and then making just a little bit of a flat spot at the bottom, so the body could “sit” on top of it. For the cute little penguin/bird (my favorite!) add the little neck cape thing in between the 2 balls. And for the top of his head, I put the lighter blue, kind of a triangle shape, and put that on first. Then I took a piece of darker blue fondant and cut a curve that would fit around his head, then cut out u shapes to go over the eye area, then wrapped it around the head.

For his beak, make a very small diamond shape then take a toothpick and place it in the center and form the beak around it, one triangle on top, and another on the bottom, then place it on the head still on the toothpick, and slide it out after it’s positioned.

For the Pokeball, I took a round ball I had and wrapped fondant around half of it, white and red, and let it firm up (use lots of powdered sugar to keep it from sticking to the ball). Then I filled it with candy.

For the name, I looked up Pokemon font and printed out his name, and then shrank it a little and printed it out again. I cut the larger one in blue fondant, and cut the smaller one out of yellow, and then put it together. I unfortunately didn’t get nice clean edges. So learn from my mistake, and use a very sharp knife, and rub your knife in Crisco to keep the knife clean. I think that little pieces of fondant started to stick to my knife and that’s why I ended up with rough edges.

Anyway, all in all my son loved it, and all the guests really liked it too, so I guess it was a success. 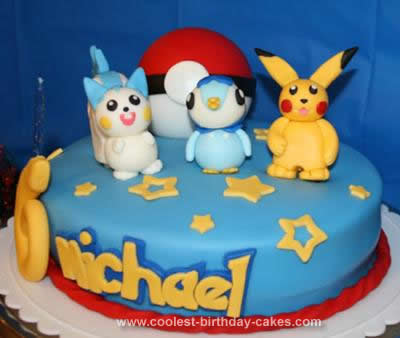