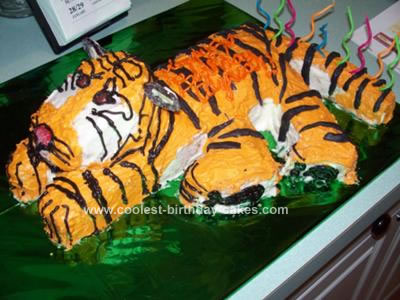 This year we had a Big Cats birthday for my daughter’s 9th birthday. Her favorite big cat is the tiger. She asked that it be a cinnamon cake so I added about 3 tablespoons of cinnamon to the Betty Crocker silver white cake recipe.

Next, I made the butter cream frosting and added cinnamon to taste. I decided, that the head is not a square, so I trimmed it to more of an oval shape. This goes on the body portion with the front paws in front. I used the smaller pieces to raise the head up a bit. Add the tail on, and the rectangular legs, and a few pieces to make the side legs look like legs and paws. To raise the back up, I cut the leftover “extra piece” through the middle with dental floss and put them on the back. It may look odd at first, but just fill it in with icing.

Now the tiger is complete. Next, is to make a base coat of frosting to hold in the crumbs. Keep it white to have as the cheeks, and the under belly, and the inside of legs. Once this dries, mix up more butter cream frosting in orange to frost the tiger. You can make black for the stripes if you like (it’s easier for doing the stripes on the face). I used home made fondant for the back stripes.

Finally, use brown candies or yellow for the eyes (tigers eyes are yellow, she just wanted brown). Resse’s Pieces work well. If you made the fondant, you can use that for the ears or roll out a black gumdrop. I used the white fondant for the inside and the spots on the outside of the ears. Roll out a red or pink gumdrop and shape it for the nose. 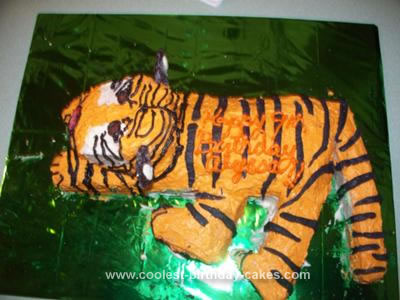 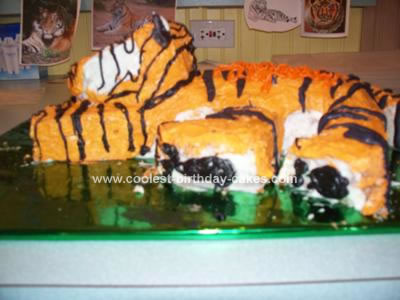