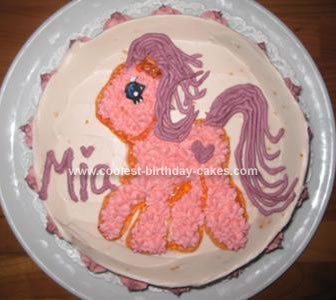 I baked this Pony cake for my daughter’s 2nd birthday party, after seeing similar ones on this web page. Homemade carrot cake inside, first frosted with orange-cream cheese frosting. Pony design was made with basic butter cream vanilla frosting.

To make the design, I photo copied from a Ponies coloring book the image I wanted. Overlaid wax paper and traced the image using red icing gel. Then laid the wax paper with gel gently over the plain frosted cake. Removed paper and refrigerated until set. Then filled in the outline using a star-tip with pink frosting and a straight tip for purple. Only the eye was placed on later (photo copied, colored, then laminated & cut out).

This cake was fairly easy to decorate and got rave reviews.