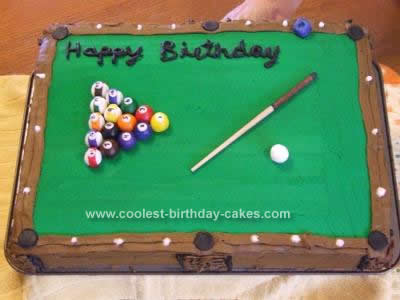 I made this Pool Table Birthday Cake recently for my dad’s 60th birthday. First I made a white cake. Any cake could be used for this. I used a large rectangle pan, approximately the size of a ¼ a sheet cake. While the cake was cooling I started on the details of the cake.

I purchased white fondant from a craft store. In order to make the pool balls I used a marble to gage the size. This was my first time to use fondant. I then colored using food coloring gel each of the balls to make them look realistic. I also saved a little from each color to make the matching stripe on the white pool balls. To make the stripes I rolled out the colored fondant and used a knife to cut the stripes. I made the fondant for these as thin as possible so they would not make the ball look to “thick.” I think rolled fondant out as thin as possible again in white to make the numbers. For this I think used edible ink to write the numbers on the white fondant. Then I used the cap to a marker to cut out the numbers, like you would if you were making donuts.

For assembly of the pool balls, I wrapped the stripes around the white balls. Then I used the numbers I had make and put one on each ball. I also made a chalk piece with blue fondant. Next I colored some butter cream green to match the felt of a pool table and brown for the sides. By now the cake was cool, so I iced the top of the cake first. Then I iced the sides of the cake. Next I added two lines around the top edge of the cake to look like the top of the pool table. Next step was to add the black circles for the pockets. These were also made from fondant. I also made pockets on the side of the cake with a different tip to look like the pockets. Next I assembled the balls by color on the cake.

The pool cue was made from wood by my husband. (He wanted to help…) This could also be made from fondant. Overall, I think the cake turned out GREAT for my first try.