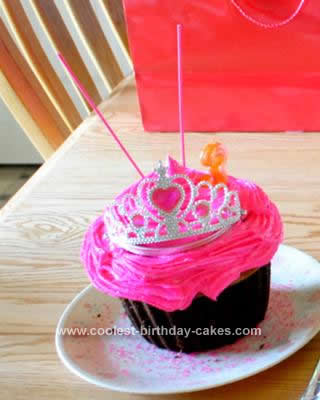 For my daughter’s 3rd birthday we decided to have a pink princess theme. I was originally going to make cupcakes, but ended up going with the giant cupcake pan instead. I just used a regular box chocolate cake mix and butter cream frosting. I bought the rose colored food coloring to get the pink I wanted.

The picture really doesn’t do it justice, it was such a pretty color. Anyway, I used a star tip cake f roster to frost the top and I also added pink sprinkles for a sparkle effect. I bought the tiara from The Dollar Tree and simply placed it on top after frosting it. I used two sparkler candles and the number three candle.

She loved this Pretty Pink Princess Cake and it was the easiest cake I have ever made. It was a huge hit at the party.