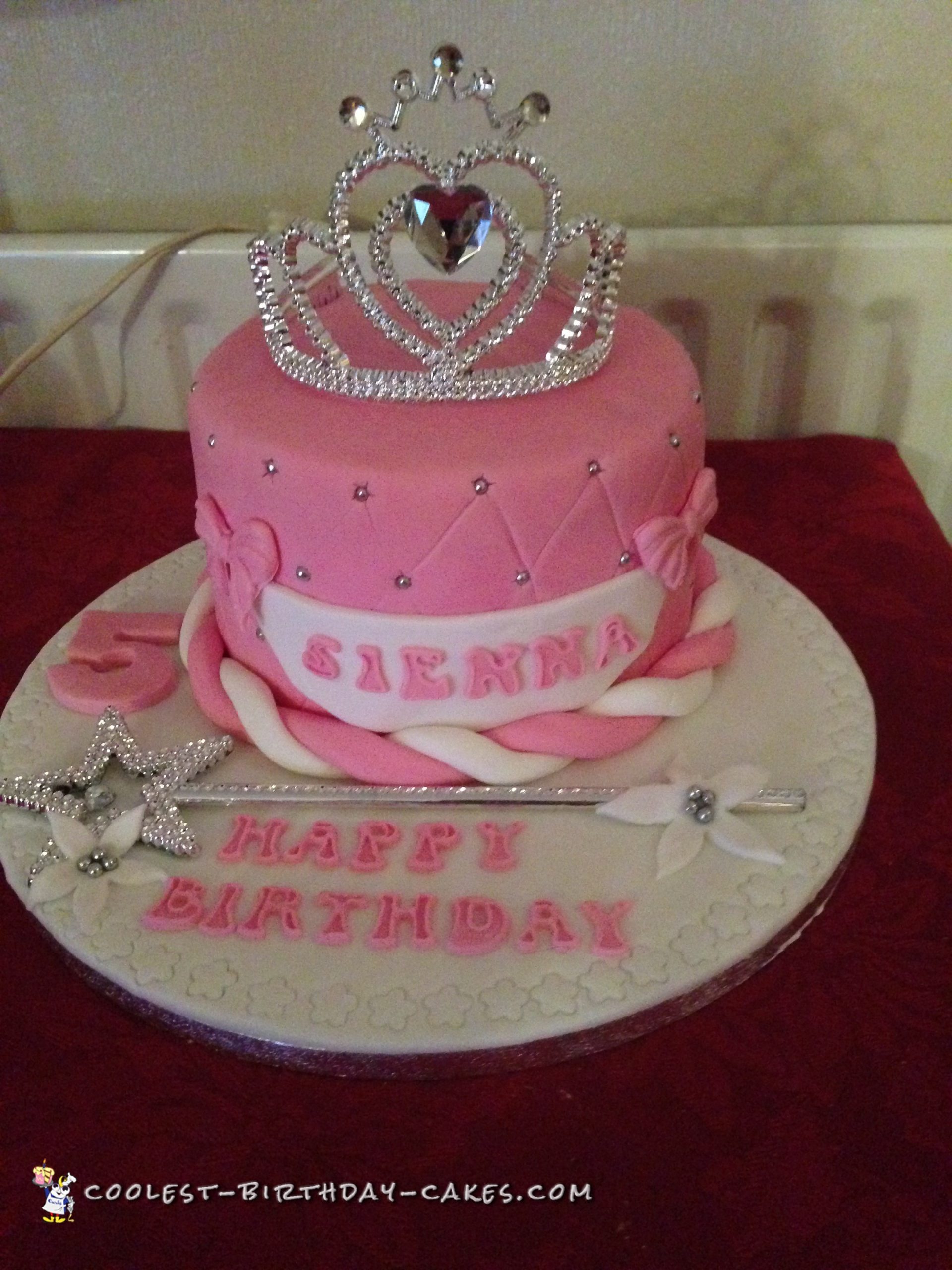 A friend of mine asked me to make a cake for her daughters 5th birthday. She purchased a crown and a wand for the topper. I started by covering the cake board in white icing and made a flower pattern all around the edge of the cake board using a small flower cutter.

Then I set this aside to dry out, baked an 8″ round cake and when cold I filled with jam and butter cream. I covered the whole cake in a thin layer of butter cream and placed in the freezer to set.

Using a different cake board I now coloured some icing in pink enough to cover the cake. I covered the cake in the pink icing and then measured a piece of paper the height and diameter of the cake and folded it in half and kept repeating it until I ended up with a strip. I lay this out flat and marked all the edges of the folds with a dot. Then I marked up all the diamond shapes by joining the dots from the top of the paper and placing the ruler diagonally joining with a dot on the bottom of the paper, (i did this to make sure it was the right pattern before doing it on the cake) I then placed this around the cake and fixed in place with a little sellotape. I made markers around the cake where the dots are using a wooden skewer and then removed the paper and joined the dots up as I did on the paper onto the cake using a ruler I then pushed a hole into each join with a modelling tool and pushed a silver ball into every hole. This was now set aside to harden.

After that I moved the iced cake to the decorated cake board and placed into position. Then I pushed the crown into the top of the cake and using some white and pink icing i made two long thin sausages long enough to go round the cake and I twisted the two colours together and then I placed it into position around the base of the cake and attached using a little water. I then placed the wand on the cake board.

I made a swag and attached the name on and then I attached this to the front of the cake. Then, using a silicon mould I made two pink bows and attached these to each end of the swag. Next I made two flowers to drape over the wand to attach it to the cake I placed these into position and with a little water  and I placed 4 silver balls in the centre of each flower.

Finally, I cut out the wording happy birthday and attached this to the cake board finally I cut out the number 5. The cake is now finished and she loved it.