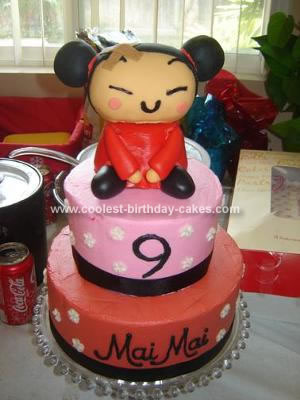 A family friend loves the cartoon character, Pucca, so for her 9th birthday, I designed this tiered cake that is both kiddie and classy. I baked two 9″ round layers for the bottom tier and frosted it with red buttercream (took half a jar of coloring and about 30 minutes! Red is so difficult…). The second tier is made up of two 6″ round layers frosted in pink buttercream.

I made white blossoms with royal icing using Wilton tip #224. After they had dried (2 days), I placed them on the sides of the cake tiers evenly spaced. I then added black ribbon to the bottom of each tier. With black buttercream, I piped her age and her name to the fronts of cakes.

For the Pucca character, I used some unusual baking pans. For the head, I used two mini metal mixing bowl/pinch bowls. I trimmed the excess then stuck the two flat ends together with buttercream and toothpicks then froze. The body was baked in a Pyrex pinch bowl (4? round) and a 4? springform cake pan. I leveled and iced the two layers, froze them for a few hours, then sculpted the body shape with a knife. I gave the head and body a crumb ice before chilling them again.

The body is covered in red fondant. I molded the arms and legs out of fondant and “glued” them on with royal icing. The head was first covered entirely with peach color fondant. I then covered that with black fondant and trimmed off the front part to expose the face being sure not to cut all the way through both layers of fondant. I piped the face with black icing. I also made fondant bandages to pay tribute to the birthday girl’s fight against brain cancer. The hair/buns are rolled up black fondant attached with straws (toothpicks weren’t strong enough).

Before assembling, I inserted drinking straws into the cake and trimmed to the height of each layer for structural support. You can use dowels, but straws are cheaper and easier to cut.