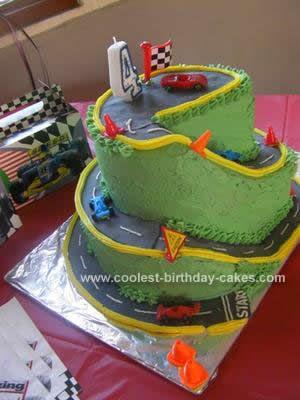 My son wanted a race car themed party for his fourth birthday and I decided to make him a race track birthday cake to fit in with the theme.

For the cake itself I made two 22cm and two 18cm cakes. I placed them on top of each other like a tower and plastered them together with butter cream icing. I then carved the cakes so that they could resemble a race track. From there I covered the whole cake with green butter cream icing and colored some fondant black so as to use it for the road.

The road was placed all the way around to look as though it is a continuous track all the way to the top. Props were used from my son’s toy box along with a few plastic cars I had bought before the time. This was the very first carved cake I made and even though it was quite scary, I am really proud of the way it turned out. 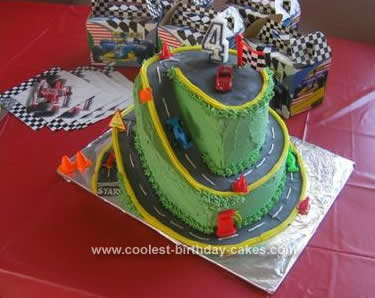