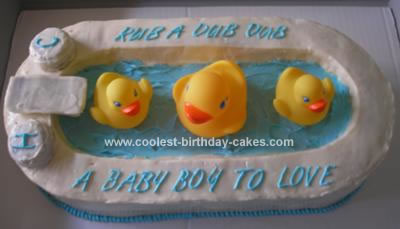 I made this Rubber Ducky Bath Tub Cake for friends baby shower that I was hosting. It was a duck themed shower. I got the idea from another web site, they originally used a Wilton oval shaped pan.

I used a square cake and a round cake cut in half. I placed each half of the round cake on either side of the square cake. I dug out a bit of the top layer to make it look more like a bathtub, iced the center with blue icing and used a spoon to make waves in the water.

The taps are made from two small upside down cupcakes and a mini kit-Kat bar covered in white Wilton melts. The ducks in the tub are rubber ducks. It is a two layer cake, one chocolate and one white because I couldn’t decide what flavor to make it.