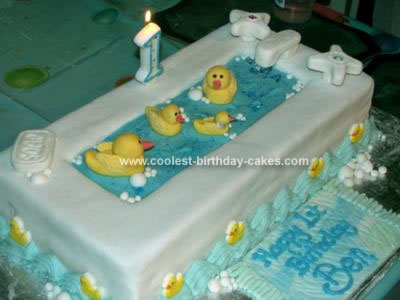 I made this rubber duck and bath cake for my son’s first birthday – he absolutely loves rubber ducks! This cake looks fab in the end but is a lot of work and is time consuming.

The yellow ducks are made from fondant icing which I coloured and left to dry for 2 weeks ( to make sure it set well). The taps are also made from fondant icing as was the soap and bubbles which also had to set for a few weeks to ensure they wouldn’t droop when on the cake!! These items could have been made from Mexican / modelling paste, but I wanted to save a bit of money and used ordinary fondant icing instead ( a bit easier on the pocket!)

I baked two 8″ square cakes, filled with vanilla buttercream and strawberry jam. Butted them together on a large cake drum and made level with icing. These cakes form the bath – so they need to be as identical as possible.

Then I cut a very shallow long rectangle out of the tops of the cakes leaving a symmetrical edge all the way round (this is where the ‘water’ goes).

Then cover the entire cake with white fondant icing, pushing in the rectangular inset.

Fill the ‘bath’ with blue coloured royal icing and use spoon to achieve watery effect. Attach taps with cocktail sticks – this means you can turn the taps ‘on’ and ‘off’! (Amused my three year daughter for ages!) Used blue coloured crystals on a silver wire to achieve effect of tap ‘running’.

Using edible glue attach bubbles, soap and ducks. Pipe the ‘waves’ around the edge fix on small ducks around sides.

Made the ‘towel’ from marbelised fondant icing and piped name etc.

Coolest Baby in a Bath Cake