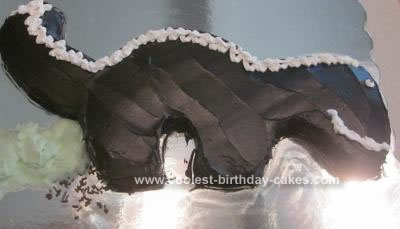 My 5-year-old son likes to come up with interesting and slightly gross cakes for his father’s birthday. This year he asked me to make a Skunk cake. The skunk has special significance in our family since our dog has been sprayed on three different occasions.

I looked on the Internet for an example to follow but was unable to find any skunk cakes. Finally I found that Betty Crocker.com has templates that anyone can print and use. So I took the body and tail of their “Rex” cake and then I modified the head from their “pony” template. I pieced the template together and measured the length from head to tail. The cake was going to be 18” long, which meant I had to buy a cardboard cake platter.

I used one yellow cake box mix and made two 9 inch round cakes. When the cakes were completely cool I cut out the pieces using the templates I had printed. To make the black frosting I used one can of ready-made dark chocolate frosting and then added black food coloring.

Starting with chocolate frosting helped me achieve the dark black color sooner. I used a little of the frosting to adhere the tail and head to the body. Then I covered the entire cake in the black frosting. Next my son used a can of white icing with a decorative tip to make the white stripe on the skunk and a smiley face. We could have done the same for the eye but my son saw a package of candy eyes at the store and really wanted to use that instead.

The final step for our cake was to somehow make it look as if the skunk was spraying it’s bad odor. So I purchased a small container of green cotton candy and my son matted down large amounts of it under the skunk’s tail. We also added small chocolate bits under the tail to make it look as if the skunk had gone to the bathroom. As I said earlier, my son wants the cakes to be slightly gross as a joke. We were all very pleased at the results. Most importantly, this cake was easy enough for a 5 year old to actively take part in the decorating process. 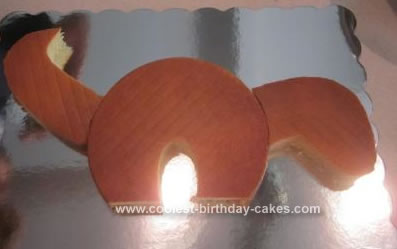