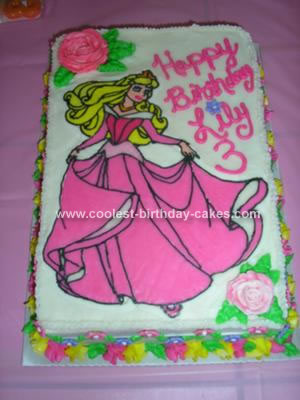 This is a sleeping beauty cake I made for my niece. It is a rectangular cake which I lightly frosted with white buttercream. I made a green vine around the sides of the cake. I then made a bunch of fondant flowers, using a fondant flower punch. I placed them on the vines around the edge of the cake.

To make sleeping beauty, I printed out the design and taped it to a piece of cardboard paper. Then I placed wax paper over the top and secured that as well. I lightly sprayed it with cooking spray and wiped it with a paper towel. Then I outlined the picture in black frosting. After that I started to fill in the design using a round piping tip (like I was coloring a coloring book).

After I had the design all filled in, I used a large round tip to pipe zag zag white buttercream all over the top of the picture (covering it up). I carefully spread it around to cover the design evenly. Then I put the cardboard with the design in the freezer. After it was frozen, I carefully turned it over onto the top of the cake and peeled of the wax paper.

Since the design was now higher than the rest of the frosting on the cake, I piped a layer of white to make it even. I made a few buttercream roses and put them on top. Then I finished the bottom border with a large star tip.