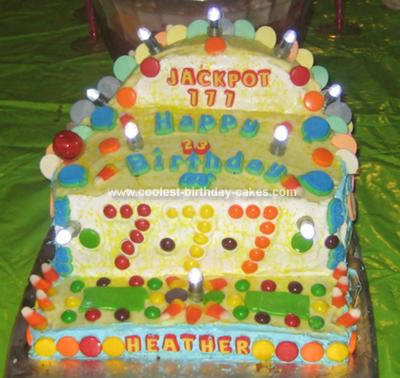 This slot machine cake was a last minute cake for my sister who planned on celebrating her 23rd birthday at the casino. It was very simple to prepare and very moist and tasty. It’s just two lemon cake mixes with about 3 jars of lemon icing (Betty Crocker).

I made a 9×13 square cake, cut it in half, and a 9×9 round cake and cut in half then put them directly from the oven to the freezer. This helps icing to spread cleaner and the cake to be moist. Next I added icing to one half of the square cake for bottom layer, then cut second half of square cake in half and stacked the two and covered the rest in icing. I had to make sure the layers were nice and sturdy and even, then I used only the very end round piece of the round cake to stack at the very top, and the other round end went behind it for support.

I added icing to the rest and made an overall smooth down before I put the final touches. The candy I used for the buttons were just skittles, sprees and candy corn. The lights on the cake are battery operated lights I used came from the wedding section at Wal-Mart. My sister was very impressed.