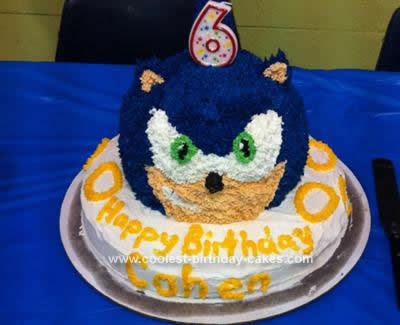 This Sonic Cake was not as easy as I had originally thought it would be! We (my mom and I) started first by baking the cakes. It consisted of a 16 in chocolate cake for the base, two bundt cakes, and s glass bowl cake(for filler).

Later we began with making some homemade buttercream icing. We used several different bowls and mixed the colors in each bowl. After this we chilled the icing a bit. Then we began to construct the sonic head. I was very worried because it looked like a Jack o lantern. So we had an awesome icing pen, and we outlined the facial features while looking at a sonic picture.

It really took about 5 hours because my decorating pen died and I had to get a manual icing decorating pen! In the end, he loved it, and said it was the most awesome cake ever! We also used the six sonic rings done with icing because he turned 6 years old.