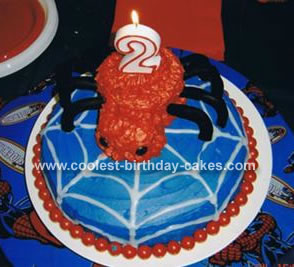 I made this spider cake for my son Jake’s 2nd Birthday. I had a whole Spider man theme going on and wanted the cake to be a little bit different than the normal spider man so I came up with this idea of putting the huge spider on the web. I still used the traditional spider man colours, red and blue but gave it a little twist.

All that I did for this one was bake a big round cake and then used a smaller baking bowl for the spiders body and used large licorice pieces for the legs.

The entire thing is covered in butter icing which I just coloured using a food colouring paste. I find these are better to use as they give you a more richer colour. I have tried other liquid colouring but the red always turns out pink and the blue always a aqua green. The paste is a little more expensive but it is definetly worth it and they seem to last a fair while too.