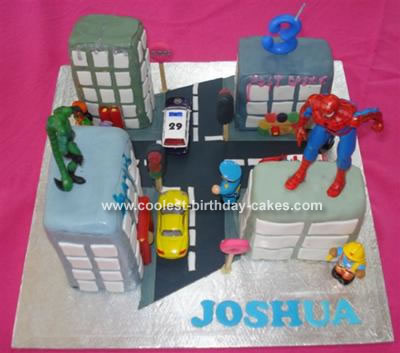 We hosted a third birthday party for my nephew and I volunteered to make him a cake. My sister-in-law wanted to do a Super Heros theme so I decided to make a Spiderman cake. I couldn’t find a recipe that was exactly what I wanted to do so I made up my own design borrowing ideas from cakes I’d seen on coolest-birthday-cakes.com.

I hired a square cake tin and bought a block of ready-made fondant icing from a baking specialist shop. I cut the square cake into 4 different size buildings. I covered all 4 pieces in plain butter icing to seal them and placed them in the fridge for a few hours for the icing to get hard.

Then I coloured some of the fondant icing grey and some green for the buildings (tip: it is better to use powder colour rather than liquid for fondant icing because the liquid makes the icing quite sticky). I rolled the coloured icing into flat circles using a rolling pin. Remember to grease the surface that you roll the icing onto and the rolling pin and also your hands with a clear cooking fat. I’ve used normal butter before and that also works fine.

For the first couple of buildings I cut the sides of the buildings out of the rolled icing and stuck the sides on one at a time but the sides overlapped and it didn’t look very neat, so then I tried a different method and draped the circles of rolled icing over the cakes and flattened the sides using my hands and cut off the excess icing around the edges. That looked a lot neater!

Next I cut lots of little windows out of white icing and stuck those on to the sides of the buildings and I made doors from licorice and biscuits and made door handles with jelly tots and smarties. I wrote the names of the buildings on the top of each one using ready-to-write icing in a tube. Be careful though, because some of my writing ran!

I rolled black icing directly onto the cake board and cut out a cross shape for the road. I cut little white lines out of white icing and used those for the road markings. I made 2 traffic lights using black icing and jelly tots on a stick and also 2 stop signs using red icing and wrote STOP with ready-to-write icing in a tube again.

I placed one building at each corner of the road and decorated the road with toy people and cars. I stuck a Spiderman figurine on the top of the lowest building and a figurine of one of Spiderman’s enemies in the top of the tallest building so that it looked like Spiderman was chasing the baddy! I bought the letters for Joshua’s name from the baking specialist shop and wrote his name on the board and stuck a number 3 candle in the top of one of the buildings. The cake was a hit with my nephew!