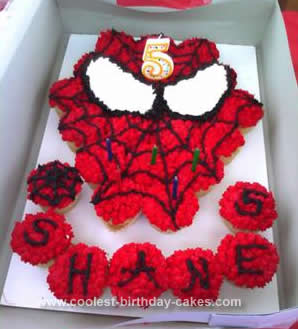 This is what you need for these Spiderman Cupcakes:

2 pounds of red icing( I purchased from a grocery store, friend is deli bakery manager)

First I made all the cupcakes, it came out to around 46. I made sure to put equal amounts into each cup. After they were all baked, I arranged them on a cardboard cake tray. I only used about 28 total. After I arranged them I squirted a little icing on the bottoms of the cupcakes so they would stay on the board and not slide around during transport.

I arranged them starting with 3, then 4, then 5, then 4, then 3, then 2. I put 7 at the bottom to use for writing the name and age. After all was assembled I began with the red icing and the Wilton star tip. I started in the center of each cake and worked my way out until they were entirely covered. Then I began to fill in the holes between each cupcake. I then added the eyes, freehanding them. That was the hardest part. I then used the writing tip to design the web.

At my son’s party the next afternoon, he reminded me that Spiderman has black around his eyes. So.. I had to add that, and I do not have a picture to upload without the candles, so you get to see that as well.

This was by far the EASIEST cake Ive ever done, and I have done quite a few, but nowhere near an expert!