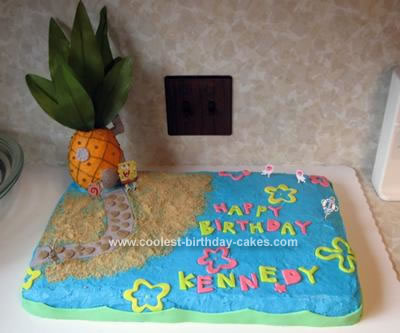 I used a 12 x 18 sheet cake pan, but I actually probably could have used just a 9 x 13 pan and it would have been large enough for this Spongebob Birthday Cake.

I first frosted the whole cake in buttercream. Then I used fondant to make the lettering, flowers, pathway, and border. I then crushed up a few graham crackers and sprinkled them on (if the frosting has dried, lightly drip/spray some water on it to make the crumbs stick).

His pineapple was made out of rice crispie treats. I molded them into the pineapple shape and then I frosted it with buttercream (orange all over then I piped the brown/grey), and the doors/windows/etc. are fondant. The leaves are just some silk ones I had from a fake plant.

The Spongebob, Gary and other characters are just stickers I bought at a craft store and I stuck them to tiny craft sticks (mini Popsicle sticks) and put them on the cake.

It took me roughly 4 hours, I think, so not too bad. The kids loved it!