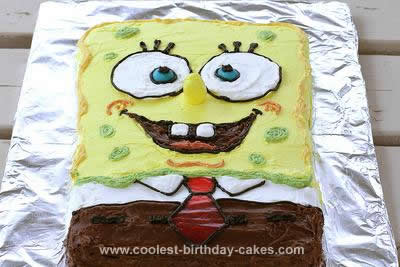 My son was turning 6 and wanted a Spongebob theme for his small birthday party. I checked on this site to find the easiest way to make this Spongebob cake and decided I wouldn’t even try to do his arms and legs – just his body/head.

I used a large 14×10 glass pan (didn’t have similar size cake pan) and made one boxed yellow cake mix. While it was cooling, I drew a paper template of exactly what I wanted to do on the cake. To me, the trick to making Spongebob look like the real thing is to make sure you make the eyes large enough and close enough together.

I carved the cake slightly, just straight outlines partly angling into his pants section. Then I crumb-coated the cake with homemade almond butter cream icing. Once that set (for me, I put it in the fridge for several hours), I used the ‘lemon yellow’ gel to get the exact Spongebob color (remembering that the icing always dries darker).

I iced the top 3/4’s of the cake in yellow icing and the bottom 1/4 in chocolate frosting out of a can. I had a problem with the chocolate frosting as it didn’t want to stick to the butter cream…so it may be easier just to color butter cream brown. I found the lid of a pickle jar that was the exact size of my template’s eyes, and pressed them into the icing to give me a guideline.

I iced his eyes with white and used bright blue gum balls on the inside. Spongebob’s nose was made out of a banana-flavored laffy-taffy that I shaped with my fingers. I used chocolate as the inside of his mouth, and pressed mini marshmallows in for teeth. I cut a piece of red fruit roll-up for his tie. I mixed a bit of bronze colored gel in the yellow for his freckles and tongue.

I outlined all of his features with black and made a darker yellow using golden yellow mixed in to the yellow base to create squiggles on the outside. The ‘avocado’ green I used for his holes was the lemon yellow icing mixed with a bit of green gel and some bronze also to make it look less lime.

My son loved it! My advice is to bring extra ‘Spongebob noses’ to the party, as every kid wanted his nose!