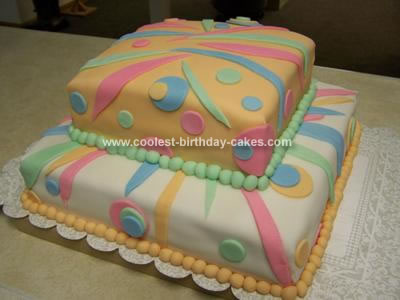 This Spots And Stripes Birthday Cake was made for a friend. She found a photo of a single round cake that she liked and this was my attempt to make a cake similar to it. They had quite a few guests so we did a two tier to feed extra people.

I didn’t have neon coloring (would like to get some though) and couldn’t get the colors perfect but they were close. I made two- 2 layer cakes (14inch and 8inch) and frosted between the two. I covered them in store bought fondant. I colored the fondant and rolled them out, cut my odd shapes and circles and glued them to the cake with a tiny amount of water. I’ve found that the corners on square cakes are pretty hard so I usually pinch the edges together and then cut straight with a pair of scissors since it looks quite a bit neater than my trying to smooth it out. Nice trick to get a straight edge and lose the messy corner.

To make the balls close in size, I first rolled out the fondant and then used a small circle cutter to cut a bunch of tiny circles. Then rolled them into balls. This isn’t something I would recommend for a very large cake because it is time consuming and a little painful for the hands. They do add a bit of a different look though and that’s what I was going for.