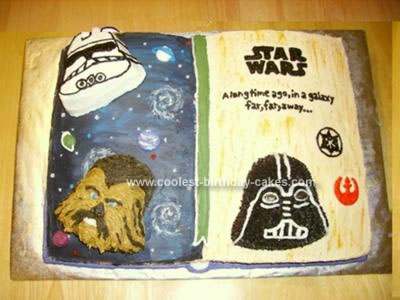 This Homemade Star Wars Book Cake I actually made for a school cake auction. I got the idea from my husband who is an avid Star Wars reader.

I used the Wilton book cake pan to make the book. The pan requires two cake mixes. I also used three mini bell shaped pans to make the raised faces of the characters. I then iced the 4 sides, and one top page with ivory colored frosting. The top page I took thinned out ivory food coloring and a brush to give the page some contrast and age.

To make the pages on the side I dragged a decorating triangle against the frosted sides of the cake (I did this before covering the second page as to not mix the darker frosting with the ivory). I then covered the second top page with a dark color I made by mixing black and purple food coloring until I got a space like color I liked.

After smoothing it over the page I dropped a few random smears of lighter colors (blue, and purple)then gently smeared them into the darker color. This gave space much more depth. I used my smallest star tip to make random white/red/blue stars. The galaxies were made by making spiral lines with white frosting then using a tooth pick to break up the solid white line. (Drag the tooth pick from the center of a spiral in a circular motion away from the center. As you get to the outer spiral you can make the circle a little larger to spread out the spiral more)After placing my stars and galaxies I placed the two heads (These were mini bell shaped cakes I made to mimic the Star Wars helmets.)

After placing the faces I added the planets by using a round tip. I changed the look of the planets by adding a color ring (small round tip), also I piped some small white lines on one and used a tooth pick again to thin out and swirl the white lines on the planet. The storm trooper was smooth white frosting with a black line to outline the helmets features. Chewbacca I used a medium star tip and two different colors of brown. I placed the top dark brown color first (pulling the frosting lines in the direction I wanted the fur to go). I then filled in the light brown making sure always place the lines in the direction the fur would go naturally.

I then places two white dots, and two smaller blue dots for his eyes. I also filled in (with white) the open area I had left for his mouth. To make the star wars logo I printed out a copy from my computer and transferred it to parchment paper. On the revers side of the paper I copped over the logo with piping gel and transferred the outline to the cake. After filling in the logo and adding the opening line to the movie I placed Darth Vader.

To make Darth Vader I used black frosting and used a small star tip the fill in the form. I then used a round tip and outlined the helmet’s features. I used black piping gel to fill in his eyes and give them a glossy look. The bookmark was made by using a flat tip, and outlined with a round tip. I then used a large round tip to outline the entire cake, and give the appearance of a hard covered book. I then went back with a tooth pick and dragged some of the darker ivory food coloring into the side pages grooves to tie the top page and the sides together.

The emblems of the republic, and the rebel forces were made by lightly pressing a round form onto the frosting surface and free handing the designs which my husband pulled off the internet.

Tad-aah, Star Wars book. I felt kind of proud when they told me my cake went for as much if not more then some of the cakes donated by professional bakeries. 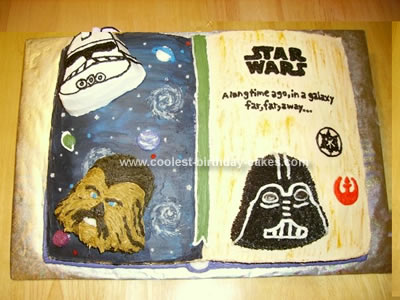 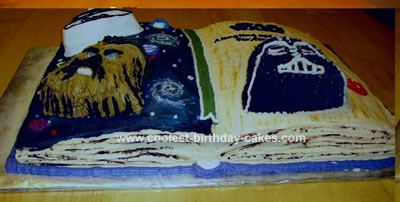